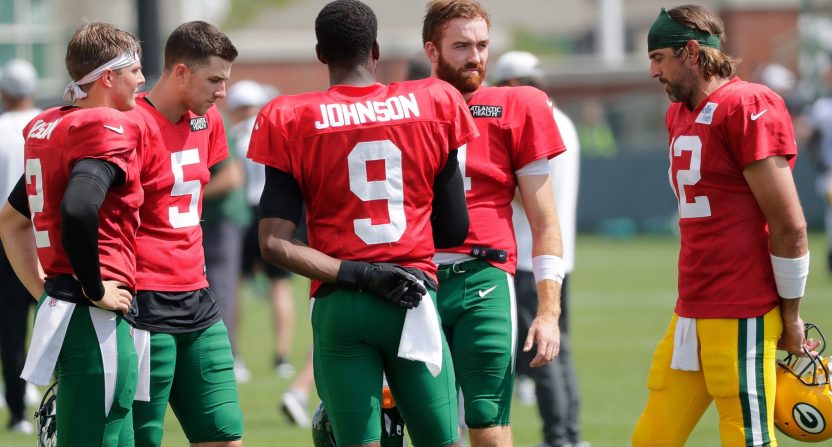 Aaron Rodgers has taken a liking to Zach Wilson.

While their circumstances couldn’t be more different and there is ongoing speculation that suggests Rodgers could succeed Wilson as the New York Jets starting quarterback in 2023, it’s clear that the future Hall of Famer sees something in the second-year pro out of BYU.

Appearing on The Pat McAfee Show on Tuesday, Rodgers acknowledged a report from NFL insider Ian Rapoport of NFL Network, that indicated Wilson was at the Jets facility during a late Friday night over the summer. Rodgers advised Wilson to “be a kid” and “relax a little bit.”

Rodgers’ relationship with Wilson dates back prior to the 2021 NFL Draft. They met then and from there, Wilson had a chance to practice with one of his boyhood idols as the Jets and Packers participated in joint practices before the former’s rookie season.

“I think he’s super talented,” Rodgers said of the former No. 2 overall pick via Pat McAfee on Twitter. “I think a little humility is good for all of us, at various times in our careers. I think the first year, they literally had no players. They came and practiced against us and I was like, ‘The defense can play, but the offense needs some more players.'”

Rodgers pointed out some of the additions New York made to its offense, like Garrett Wilson, C.J. Uzomah, and Breece Hall, as the Jets built around their young quarterback.

“For him, it’s just gonna be humility — lean into that — and just consistently working on the fundamentals,” Rodgers added. “I think he’s so talented, but the best in the business can make all the plays outside the pocket, can move around fundamentally inside the pocket…

“I hope that whoever they decide to go with at [offensive] coordinator can come in and work with him and kind of break down a lot of the fundamentals for him and get him playing on time because I think he’s talented enough to have a long career in the league.”