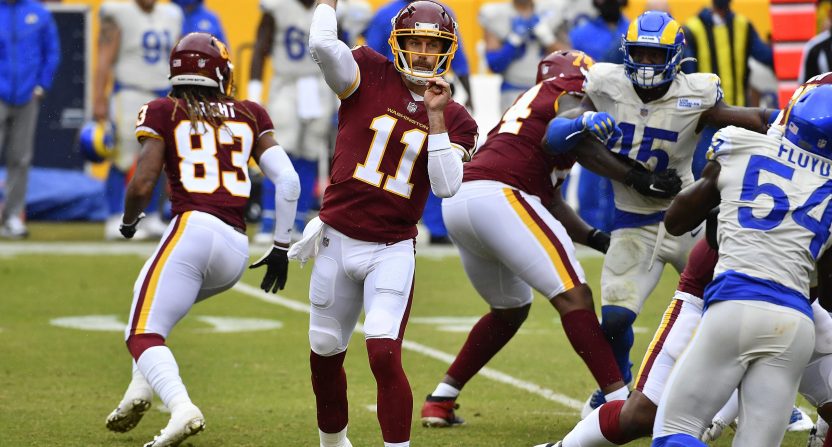 In November 2018, Washington Football Team quarterback Alex Smith was severely injured in a game against the Houston Texans. So bad was the spiral and compound fracture to his tibia and fibula in his right leg that he developed life-threatening necrotizing fasciitis, which then led to sepsis and required 17 different surgeries over nine months. While amputation of the leg was briefly considered, Smith was able to keep the leg thanks to skin grafts and a transfer of muscle from his left quad.

All of this is to say that Smith’s injury is the kind that you almost never play football again afterward. Smith missed the entire 2019 NFL season as he recovered and just the fact that he was able to keep walking was considered a big victory. Smith, meanwhile, was not satisfied with just that. He wanted to get back on an NFL playing field, as ludicrous as that might have seemed.

And yet, one month shy of the two-year anniversary of that gruesome injury, Smith entered the game on Sunday for Washington at quarterback, completing an amazing comeback timeframe.

There’s a cruel irony to Smith’s return in that it comes at the expense of another quarterback’s injuries. While the franchise was hopeful that Smith would eventually return to the starting job in a few weeks, it assumed that Kyle Allen would carry the load until then after replacing demoted starting quarterback Dwayne Haskins. But Allen needed to leave the game due to an injury, potentially a concussion, and with Haskins at home sick (maybe?), that meant the team turned to Smith to get them back on track against the LA Rams.

After Kyle Allen left due to injury, Alex Smith is coming in at QB for Washington. It will be his first appearance since his injury in Nov. 2018 pic.twitter.com/xZ0i4Jt4DQ

There are definitely a few ways to feel about Smith’s return. Certainly, we can applaud his perseverance in fighting back against the odds to ever step foot on a football field again. But, there’s also the take that Smith is being trotted out way too soon given the extent of his injuries, not to mention that his return could come off as more of a PR coup than a smart decision on his behalf.

Alex Smith’s family giving him a standing ovation as he takes the field for the first time is nearly two years is everything 👏👏 pic.twitter.com/HYecOJBloN

there's two kinds of people: people who see alex smith's return as a feel-good moment and those of us who kinda wanna vomit over it all.

also: IF rivera thinks smith is okay to play, why would you have ever started kyle allen? this is so uncomfortable.

Not to mention, if there’s an NFL franchise that many people think would put money over safety and have provided no evidence that they’d ever do the right thing without being forced to, it’s Washington.

Alex Smith completes his first pass with his family in attendance. #WashingtonFootball

No matter where you stand, we’re all in agreement that we just hope Smith doesn’t get injured again. And whatever happens, that the guy gets to live a long life beyond football.