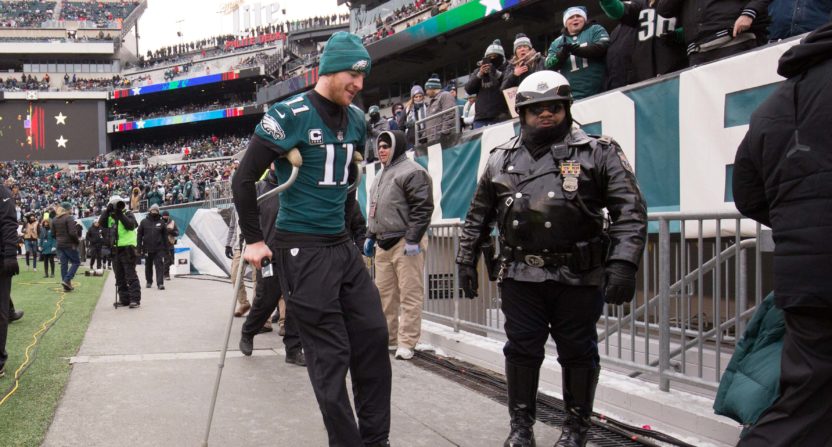 The Jacksonville Jaguars, New England Patriots, Minnesota Vikings and Philadelphia Eagles don’t have a lot in common, aside from the fact they’re the only four teams left standing in the NFL playoffs.

But there is something all of them did remarkably well this season, and that’s overcome injuries.

It all started in August, when the Patriots lost top receiver Julian Edelman to a season-ending knee injury. In 2016, Edelman went over 1,000 yards and was targeted twice as often as any other receiver on the team. The Pats offense recovered well, thanks mainly to Rob Gronkowski, but they were also without top deep threat Chris Hogan for virtually the entire second half of the year.

The Patriots famously overcome injuries all the time, and they won last year’s Super Bowl despite not having Gronkowski. But Edelman and Hightower are worth more combined than Gronk is on his own. This would be a hell of a feat.

Meanwhile, the Jaguars also spent basically the entire year without their No. 1 receiver after Allen Robinson suffered a torn ACL early in the season opener. With starter Allen Hurns also missing significant time, the Jags offense has often been forced to rely heavily on unproven youngsters like Leonard Fournette and Keelan Cole, who led the team in rushing and receiving, respectively.

But at least the Pats and Jags got 16 starts apiece out of their quarterbacks. The same can’t be said for a Vikings team that got next to nothing out of preseason starter Sam Bradford and preseason backup (if healthy) Teddy Bridgewater. With Bridgewater still not back from his severe 2016 knee injury, Bradford suffered a knee injury of his own one week into the regular season, which gave us all a chance to find out that journeyman Case Keenum was on the Vikings roster.

Keenum has earned himself a lot of money while exceeding all expectations and remains the starter even with Bradford and Bridgewater healthy, which is phenomenal — especially considering that the Vikes have also been forced to work without rookie sensation Dalvin Cook. The second-round running back was tearing it up before landing on injured reserve with — you guessed it — a knee injury a month into the regular season.

The Vikings have had to make do without their presumed starting quarterback and top running back, while the Eagles have tried to weather the storm without their MVP-caliber starting quarterback and his future Hall of Fame left tackle. And while the jury is still out on whether they can survive with Nick Foles starting in place of Carson Wentz (knee injury) under center, they did appear to completely survive the midseason loss of Jason Peters (yes, also a knee).

None of this is surprising, because injuries happen to everybody and overcoming them with success is often a prerequisite to get to the Super Bowl. That said, a lot of Super Bowl teams have benefited from having better injury luck than others. That is clearly not the case with Jacksonville, New England, Minnesota and Philadelphia, which is a testament to their mental fortitude as well as how well each roster has been built.