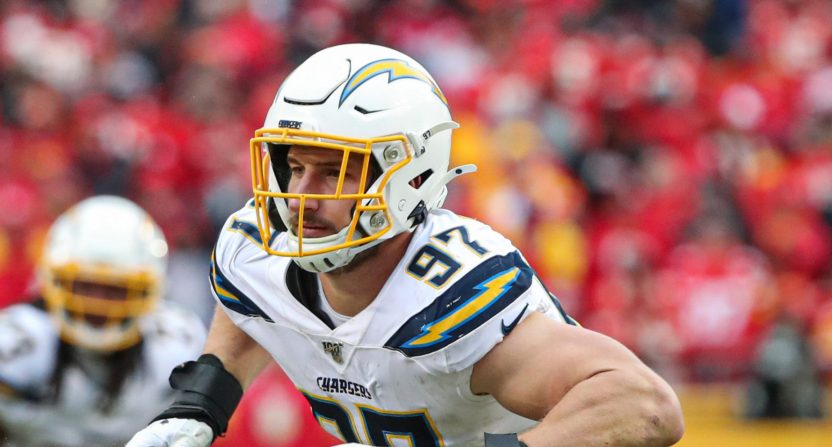 Now that the 2020 NFL free-agent frenzy has basically ground to a halt, it’s time to…start previewing the 2021 free-agent frenzy! That’s right, it’s never too early to begin dreaming about stars your team could but probably won’t sign, so here’s an early look at the top 30 players currently scheduled to hit the open market next March.

Warning: A lot of these guys will NOT see free agency.

30. Cincinnati Bengals WR A.J. Green: If the seven-time Pro Bowl can bounce back from injuries in 2020, he’ll be viewed as a No. 1 target.

28. Denver Broncos edge Von Miller: The three-time first-team All-Pro is slowing down as he approaches 32, but he was still a Pro Bowler in 2019.

27. Washington Redskins OT Trent Williams: The seven-time Pro Bowler sat out all of 2019, but still should have several strong years ahead of him at the age of 31.

26. Houston Texans WR Will Fuller: We know the 25-year-old has tremendous playmaking ability, but can he stay healthy?

25. Arizona Cardinals CB Patrick Peterson: He’ll turn 30 in July, but the eight-time Pro Bowler should have enough gas left in the tank to make a big difference for years to come.

23. Washington Redskins G Brandon Scherff: The three-time Pro Bowler has star-level ability, but will have to prove he can stay healthy as a 28-year-old in 2020.

21. Minnesota Vikings S Anthony Harris: In his first relatively full season as a starter, the 28-year-old tied for the NFL lead with six interceptions in 2019.

18. Minnesota Vikings RB Dalvin Cook: He still has to prove he can stay healthy, but at the age of 24 he was one of the top offensive weapons in the game in a Pro Bowl 2019 campaign.

17. Los Angeles Chargers TE Hunter Henry: The 25-year-old would also be ranked higher if he could stay healthy, but he set new career highs in receptions and yardage despite missing four games last year.

15. Pittsburgh Steelers edge Bud Dupree: The 27-year-old was one of just four players with more than 10 sacks and more than three forced fumbles in 2019.

13. New England Patriots G Joe Thuney: The 27-year-old hasn’t missed a start in four stellar seasons with the Pats. He looks as though he’s becoming a star.

12. Jacksonville Jaguars edge Yannick Ngakoue: The 25-year-old has recorded at least eight sacks in his first four seasons, and his 14 forced fumbles in 63 career games are the fourth-highest total in the NFL during that span.

11. Tampa Bay Buccaneers edge Shaquil Barrett: The reigning NFL sack leader was a strong Defensive Player of the Year candidate in a breakout 2019 campaign. Now he just has to prove that wasn’t an aberration.

10. New Orleans Saints RB Alvin Kamara: The three-time Pro Bowler has been one of the most electric offensive players in the league since his incredible rookie of the year campaign in 2017. Will there be questions about his longevity. At least he’s still only 24.

9. Tennessee Titans RB Derrick Henry: The 26-year-old carried the Titans on his back to the AFC championship and was the league’s rushing champion in 2019. If he can prove that wasn’t an anomaly, he’ll break the bank.

8. Los Angeles Rams CB Jalen Ramsey: The three-time Pro Bowler hasn’t been quite the same since that epic sophomore season in Jacksonville, but he’s still one of the best defensive players in the game and only 25 years old.

6. Detroit Lions WR Kenny Golladay: The 26-year-old made his first Pro Bowl while catching a league-high 11 touchdown passes in the second 1,000-yard season of his career in 2019.

5. Tampa Bay Buccaneers WR Chris Godwin: The 24-year-old exploded with 1,333 yards and nine touchdowns as a Pro Bowler in 2019. He also became just the second player in at least the last quarter-century to catch more than 70 percent of the passes thrown his way and average more than 15.0 yards per reception on 100-plus targets.

4. San Francisco 49ers TE George Kittle: In the last two seasons, the 26-year-old has averaged 1,215 yards per season and 14.0 yards per reception while catching 71.2 percent of the passes thrown his way, and his yards-per-game average of 81.0 leads all tight ends during that stretch.

3. Los Angeles Chargers edge Joey Bosa: The 24-year-old was one of just five NFL players to register more than 30 quarterback hits to go along with his 11.5 sacks in 2019. He’s already a superstar.

2. Kansas City Chiefs DL Chris Jones: The Chiefs probably don’t win Super Bowl LIV without Jones, who was a game-wrecker time and again in 2019. The 25-year-old had a ridiculous 15.5 sacks two seasons ago and was a no-brainer Pro Bowler last season.

1. Dallas Cowboys QB Dak Prescott: If a quarterback with multiple Pro Bowl nods and a 97-to-36 touchdown-to-interception ratio (as of now) hits the open market at the age of 27, he has to be the hottest commodity.