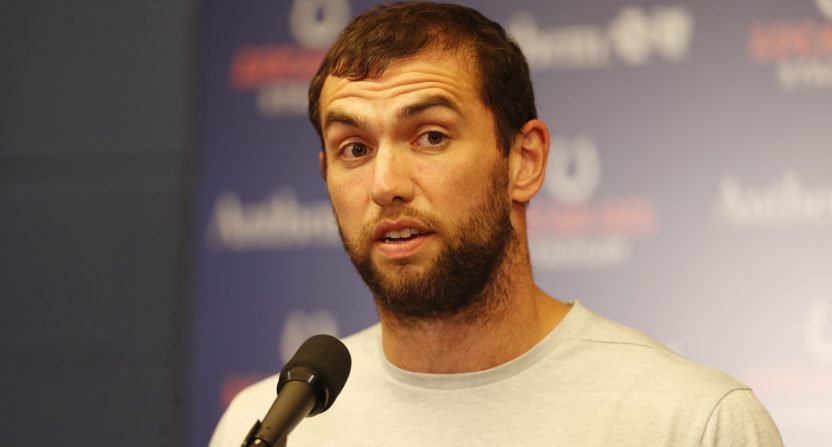 At the age of 29, Andrew Luck has decided he is done with the NFL. Luck’s retirement was leaked Saturday night, earning him boos from moronic Colts fans as he walked off the field for the final time.

The news was obviously shocking, but also to some extent unsurprising. Some sort of ankle or calf injury has held Luck out for most of training camp, and it was only a couple of years ago that shoulder problems robbed him of an entire season. Incompetent offensive lines for much of his career did him no favors. The list of his career injuries is long and while he’s just 29, it’s an old 29 after reading that list.

Everyone knows football is an unnatural sport and probably decreases your lifespan. It requires a certain type of person to keep with it and not step away to protect his future. The NFL is supremely aware of the unique breed of people they hope to cultivate, which is why the military and football seem so closely intertwined. The culture of the game, both among the NFL and among a large subset of flag-waving fans, is sacrifice. Teams fear players who may not subscribe fully to the culture of sacrifice and conformity. Reason tells us (and probably the NFL, too) that players shouldn’t dive so deeply into that culture. But the NFL is too deep into this now to stop.

No NFL team wants players who they don’t see as “all in.” That’s why the NFL Draft is such an absurd enterprise now. It functions as an opportunity for “Football Guy” executives and coaches to weed out the players they don’t think are all in on the Culture of Football,” and decide whether or not they’re willing to bring in the “Intelligent and Thoughtful” guys. Josh Rosen fell because he had a personality.

If you’re wondering why Colin Kaepernick isn’t in the league, this is (partially) why: NFL teams think he will be too preoccupied with doing things that aren’t football related to be a “True Football Man” (among other reasons). When the sustainability of the culture is in danger, the NFL panics, because the league has been constructed on the assumption that players are willing to overlook the inherent dangers of the sport. The league needs a healthy serving of crazies to offset the intelligent and thoughtful guys. That’s why Kareem Hunt, Tyreek Hill, Richie Incognito, and Vontaze Burfict will always find jobs.

Luck has been one of the leaders of the intelligent and thoughtful group. He went to Stanford for four years. He is an avid reader who started a team book club. He has a degree in architectural design and is known for his interest in the field. He was always a candidate to decide that football would ultimately be too harmless to his future, too stressful, and too painful to make it worth it. The horrific offensive line that blocked for him for years gave him an unusually high amount of injuries, thus accelerating the process.

It isn’t too hard to put yourself in Luck’s shoes here. He married his longtime girlfriend in March and is expecting his first child. He knows he will have a life after football, and the troublesome injuries will only keep coming, each adding to the costly post-career toll.

Luck clearly isn’t the first football player to retire young. Barry Sanders, Jim Brown, Calvin Johnson, etc. all retired before their prime but Luck is an elite quarterback for a good team. He hasn’t turned 30 and is hanging it up, in a league where a bunch of elite QBs are in their late 30s and early 40s. This is a league-altering retirement. The NFL is absolutely terrified of any trend Luck could possibly set.