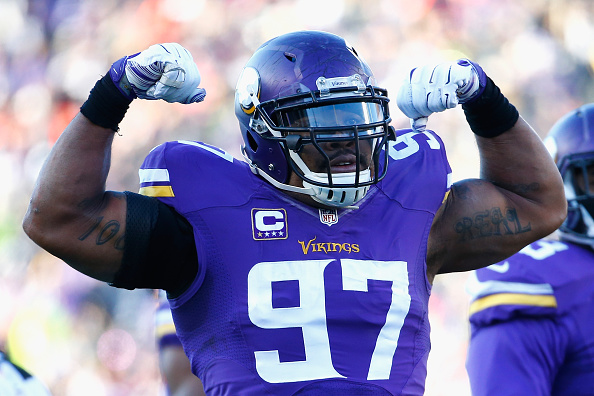 In one of the most unpredictable seasons in NFL history, the Minnesota Vikings stand out as one of the league’s most glaring enigmas. Yes, they’re off to a 5-2 start, but also teased fans by winning five of their first seven games last season (in fact, they were 5-0) and went on to finish 8-8.

That may have been a very different team, at least offensively, but it’s not as though the Vikings aren’t facing similar questions again as they try to avoid another second-half collapse in 2017.

It’s hard to think about the Vikings’ playoff chances without wondering how much better they’d be if not for the loss of running back Dalvin Cook, who went down for the season with a knee injury after averaging 4.8 yards per carry in the first four games of his NFL career. Highly-paid veteran Latavius Murray finally stepped up with a strong performance (113 yards and a touchdown on 18 carries) in last week’s victory over the Baltimore Ravens, and fourth-year third-round pick Jerick McKinnon has flashed at times, but neither can do what Cook could do.

It’s also hard to predict what’s to come for this team without knowing what the short-term future holds at the most important position on the field. Fragile former No. 1 overall pick Sam Bradford has been out with a knee injury (aside from a brief, uninspiring performance three weeks ago against the Chicago Bears) ever since lighting up the New Orleans Saints in what was undoubtedly the best showing of his career in Week 1.

There were questions as to whether Bradford could carry this team after failing to do so when they lacked balance and pass protection, but had one of the best defenses in the league last season. So naturally, there are doubts that backup Case Keenum can do it, even if the offense has more balance despite the loss of Cook and the offensive line has been better with two new offensive tackles in place.

Keenum had a superb outing against the Tampa Bay Buccaneers in Week 3 and was steady against the Chicago Bears in Week 5, but he’s not consistent and he’s not the type of quarterback who can lead a team deep. He’s a tailor-made backup, good for a spot start or two but liable to become exposed beyond that.

Good to see you back out there, @teddyb_h2o!

And that’s what leads us to the wild card that could change the 2017 season inside and outside of the NFC North: Teddy Bridgewater. Remember, the expectation in 2016 was that Bridgewater would take off in his third season, then he suffered a gruesome knee injury prior to the start of the year and his career was in so much jeopardy that the team didn’t even exercise his fifth-year option last offseason.

Fourteen months later, Bridgewater is practicing again, and there’s a chance he could be ready play by the time Minnesota returns from its Week 9 bye.

When will Bradford be ready? What about Bridgewater? How effective can either be when they return? What if neither returns? What if both return? Do the Vikings have the bandwidth to hold a quarterback battle while in the midst of a playoff race? And even if they find a quarterback by the time Week 17 has concluded, what will that process do to the team in the meantime?

The great news is the division is wide freakin’ open with the Green Bay Packers missing Aaron Rodgers, the Detroit Lions struggling and the Chicago Bears rebuilding.  The Vikes are already a game up on Green Bay and they possess a two-game lead on Detroit, which ain’t bad when your next opponent is the 0-7 Cleveland Browns.

To boot, the defense — led by sack machine Everson Griffen, shutdown corner Xavier Rhodes, superstar safety Harrison Smith and talented front-seven defenders Anthony Barr, Linval Joseph and Danielle Hunter — ranks in the top five in terms of points and yards per game as well as yards per play, and it isn’t relying on takeaways as heavily as it was early last year. This is sustainable, which at the very least makes the Vikings one of the NFL’s most intriguing and unpredictable teams entering the second half of the 2017 season.