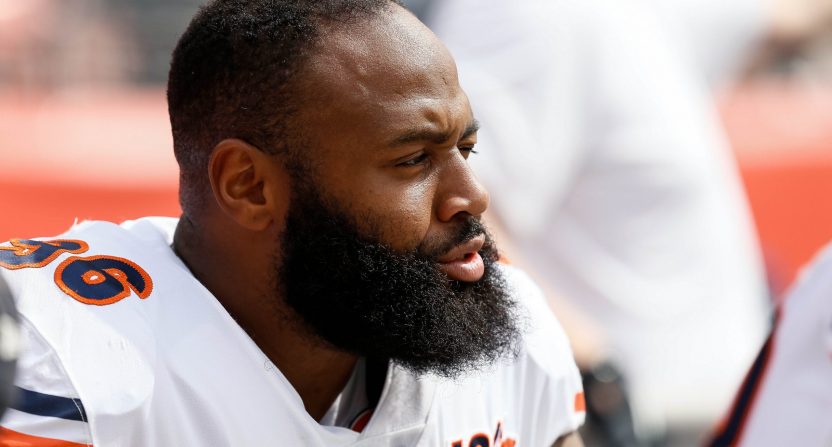 Chicago Bears defensive end Akiem Hicks is one of the best defensive linemen in the NFL, and he’s also one of the best interviews. On Wednesday, Hicks was particularly honest and emotional while speaking with the media about quarterback Colin Kaepernick’s continued unemployment from the NFL.

Hicks had a lot to say on the topic, and finished with this line that makes the point loudly and clearly: “We signed Mike Glennon.”

Akiem Hicks says it's clear to him that Colin Kaepernick lost his career because of kneeing then drops a bomb in the middle of the conversation: "We signed Mike Glennon."

Twitter doesn't do this justice, but Akiem Hicks now fighting back some tears. "I've been censored my whole life."

In 10 years of covering the Chicago #Bears, the conversation we just had with @The_Dream99 was the most honest, real, on-the-record interview I've been a part of. The courage to speak up in the NFL climate isn't easy. He was incredible.

Kaepernick protested police brutality and racial injustice during the national anthem in 2016, and hasn’t played in the NFL since.

Hicks said that in 2016, he was afraid he would be “fired” and “blackballed” if he chose to kneel during the national anthem, and his feelings were confirmed to be “real” with Kaepernick remaining unsigned.

“It was the reality, and hopefully it won’t be going forward.”

Via the Chicago Sun-Times:

“I had the same thought that 85-90 percent of the league felt at that moment: If I get down on one knee in front of this stadium, I am fired; My job, my life, my career is over; I will be blackballed,” he said. “And then, to come out on the other end and watch it actually happen to Kaepernick just tells me that my feelings were real. It was the reality, and hopefully it won’t be going forward.”

“All I will say is this: We saw it. We watched how it unfolded,” Hicks said Wednesday. “And we see that he doesn’t have a job now. This call isn’t to advocate for Kaep getting a job, but he did sacrifice his position for where he is now. His career was ended because of it, in my opinion. We signed Mike Glennon.”

Kaepernick’s activism and peaceful protests have returned to being a prominent topic of discussion following the killing of George Floyd. On May 25, Minnesota police officer Derek Chauvin kneeled on Floyd’s neck for nine minutes, despite Floyd telling Chauvin and three other officers that he couldn’t breathe. It was announced on Wednesday that Chauvin was charged with second-degree murder, and the three other officers were charged with aiding and abetting murder.

In 2016 with the San Francisco 49ers, Kaepernick threw 16 touchdown passes and four interceptions, with a 90.7 passer rating. He added 438 yards (6.8 yards per carry) and two touchdowns on the ground. He started 58 games for San Francisco from 2012-16, and led the 49ers to the Super Bowl in the 2012 season after replacing quarterback Alex Smith in-season.

The Bears signed career backup Mike Glennon before the 2017 season and gave him a three-year, $45 million contract. Glennon performed terribly in four games as starting quarterback with Chicago (76.9 passer rating), before being permanently replaced by quarterback Mitch Trubisky (a rookie at the time). After one season with the Bears, Glennon was released.