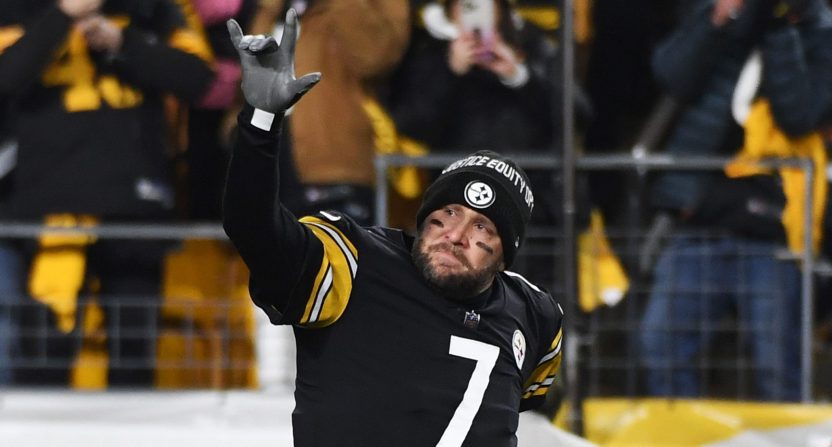 Monday marked what is believed to be Ben Roethlisberger’s final home game as a member of the Pittsburgh Steelers, and it was an overwhelming moment for the two-time Super Bowl champion.

Big Ben went out the way he wanted in victorious fashion against the Cleveland Browns, winning 26-14 at home in a game packed with several emotional moments, including embraces with the fans in Heinz Field and with his family after the game.

What a moment for Pittsburgh. pic.twitter.com/AzU1AtwkFI

Najee Harris and I finished talking and our camera swung over to Ben Roethlisberger's final walk off Heinz Field and to his family. Ben talked later about his kids understanding the moment. As a mom whose kids are just starting to get what I do…this is the moment that got me 💛 pic.twitter.com/hR5j1Pq9Pb

Many former teammates of Big Ben went to social media as well to congratulate him on what is likely his last home game in Pittsburgh and one of the final games of his 18-year NFL career.

Jerome Bettis has been with Ben Roethlisberger the whole step of the way just like Ben was there for him. #Steelers #NFL  pic.twitter.com/ttNRsCrT9F

That's my quarterback. 💯 It was a privilege to be your teammate and a great honor to call you my brother. #BigBen #family pic.twitter.com/Qenw2XQxuw

While his legacy is more complicated than some would care to admit, one thing is for certain and that is Roethlisberger is beloved by the Steelers faithful.

While the individual numbers haven’t exactly been there for Roethlisberger, he has done enough this season to put his team in a position for a slim chance at a playoff spot. The Steelers will need a number of things to go their way in order to make the playoffs, starting with a win against the Ravens in Week 18.

Should they win against the Ravens, the Steelers will also need for the Jaguars to beat the Colts, and for the Chargers and Raiders game on Sunday night to not end in a tie.