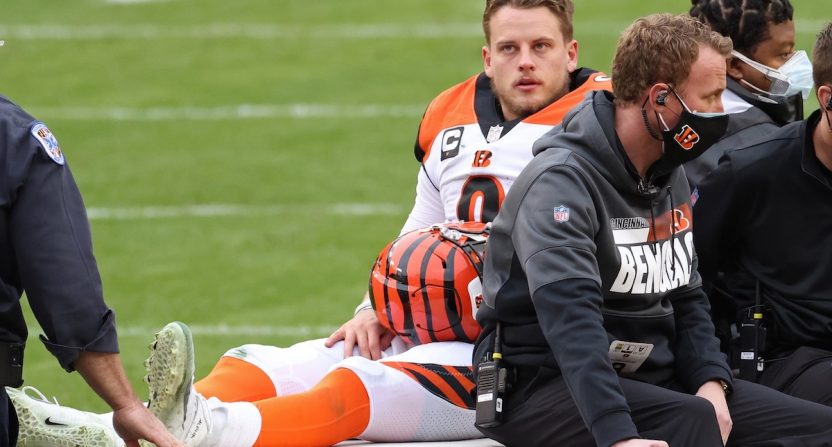 Joe Burrow’s rookie NFL season was already known to be over after suffering a serious knee injury in the Cincinnati Bengals’ 20-9 loss to the Washington Football Team. He acknowledged as much in a Tweet thanking fans for their support, ending with “See ya next year.”

Burrow was hurt in the third quarter upon being hit by Washington linebacker Montez Sweat and defensive lineman Jonathan Allen almost simultaneously. (Though it was Allen’s tackle attempt that presumably caused the most damage to that left knee.) The rookie needed to ride a cart off the field after the injury.

#InjuryReport 🚨- Reposting this video, as an MRI has confirmed Joe Burrow has torn the ACL and MCL of his left knee. This video shows the anterior tibial translation, followed by an auto-reduction after the pressure was released from his leg. pic.twitter.com/AIl1wfHccE

But Burrow’s left knee is reportedly even more seriously injured than the Bengals initially feared. According to ESPN’s Adam Schefter and Ben Baby, an MRI exam revealed that the quarterback tore multiple ligaments and sustained other structural issues with the injury.

With that kind of damage, it’s unlikely that Burrow will be ready to open next season for the Bengals. Depending on his recovery — and his status as the team’s franchise quarterback — it’s possible that Burrow could miss all of the 2021 campaign.

Will Cincinnati have to go with Ryan Findlay as the starting quarterback most of next season or could the team pursue a free-agent? (Veterans expected to be available include Tyrod Taylor, Ryan Fitzpatrick, Mike Glennon, Cam Newton, Jameis Winston, and Philip Rivers.)

These types of knee injuries, like the one Joe Burrow suffered, usually sideline players anywhere from 9-12 months, though each person heals and rehabs differently. But no matter how quickly Burrow does or doesn’t recover, next year’s status is now in question. https://t.co/XfUUMbMPOx

Burrow was having a strong first professional season after being selected No. 1 overall in April’s NFL Draft out of LSU. Had he been able to finish Sunday’s game, Burrow likely would’ve notched his sixth 300-yard game, which would’ve been an NFL rookie record. He was also on pace to break Andrew Luck’s record for most passing yards (4,374) in his first season.

In his first 10 games, Burrow threw for over 300 yards five times. According to ESPN, his 2,688 passing yards were the fourth-highest total in a quarterback’s opening 10 games. (That includes the 203 yards he compiled for Week 11.) For the season, he completed 65.3 percent of his passes with 13 touchdowns and five interceptions.

Thanks for all the love. Can’t get rid of me that easy. See ya next year✊

In light of Burrow’s injury, Bengals coach Zac Taylor and director of player personnel Duke Tobin will be heavily scrutinized for not investing more in the offensive line supposed to protect the rookie signal-caller. The team didn’t invest in the position during free agency or the draft.

Taylor defended his offensive line after Sunday’s game, insisting they’ve performed well despite frequent turnover (especially on the right side of the line) this season.

“Those guys have done a good job. It’s been a revolving door of players; we’re doing a great job,” said Taylor. “Joe’s done a good job moving us down the field, and we felt like we’re making a lot of progress over the last five weeks, and we’re not going to apologize for any of that.”

ESPN’s Stats & Information confirms Taylor’s contention that the line has improved since Week 6. Up until that point, Burrow was sacked more than anyone else in the league. Still, he was sacked 32 times this season, the third-highest total in the NFL this season. Burrow was also hit an additional 28 times (10th) and pressured on 89 snaps (sixth), according to Pro Football Reference.