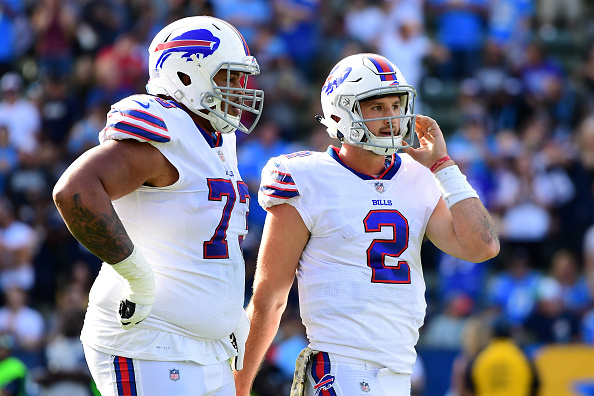 There were a number of interesting moments from this week in the NFL. Fans saw Buffalo Bills rookie quarterback Nathan Peterman throw five (FIVE!) interceptions in one half, the New England Patriots face-off against the Oakland Raiders in Mexico, and the former home of the Atlanta Falcons get imploded.

So how did people on Twitter react to everything that went on during Week 11 of the 2017 NFL season?

After losing two straight games, the Buffalo Bills felt it was necessary to make a quarterback change heading into their Week 11 matchup with the Los Angeles Chargers. So making his first career start under center for the Bills on Sunday was rookie Nathan Peterman and the kid’s day could not have gone much worse.

Sean McDermott when he sees Tyrod Taylor in the locker room after Nathan Peterman threw 5 first half interceptions pic.twitter.com/jw7GPg522m

Devil’s advocate:
Nathan Peterman threw 9 passes that were NOT intercepted in the 1st half. pic.twitter.com/MwQRrWbhZe

Dre Kirkpatrick fails to score on a 101-yard interception return

Midway through the first quarter of his team’s matchup with the Denver Broncos on Sunday, Cincinnati Bengals corner Dre Kirkpatrick snatched a pass out of the air thrown by Broncos quarterback Brock Osweiler. Kirkpatrick seemed to be well on his way to an easy touchdown the other way, but for some reason that is not how it turned out.

Dre Kirkpatrick returns an interception 100 yards, and fumbles it entirely on his own. Down at the DEN-1. pic.twitter.com/zVTUogtbro

Dre Kirkpatrick’s 101-yard interception return in the 1st half against the Broncos is the longest in NFL history that did not result in a touchdown (via @EliasSports). pic.twitter.com/O4FchcCJUL

How bad are the Bengals…Dre Kirkpatrick just returned an interception 100 yards and didn’t score.

“Everybody got jokes,” Dre Kirkpatrick posted on his Instagram account after someone put in oxygen tank on his seat, referring to him running out of gas and fumbling what would’ve been a 100-yard pick six. https://t.co/5RcMVYASaX pic.twitter.com/XAWZOeF1Ta

Packers shutout at home for the first time in 11 years

It has been a miserable past few weeks for the Green Bay Packers since star quarterback Aaron Rodgers went down in Week 6 with a broken collarbone. Their season only got worse on Sunday against the Baltimore Ravens when they turned the ball over five times and failed to score a point at Lambeau Field for the first time since 2006.

“I’d rather die than watch the Packers get shutout.”

Packers ritual, if you get shutout you have to piss your pants pic.twitter.com/6n6vzZkALX

The Packers have been shutout at Lambeau Field only 7 times since 1970.

Dean Pees has been the defensive coordinator for two of those games. pic.twitter.com/cWXXkoCIa6

Patriots and Raiders battle (sort of) in Mexico

For the second straight year, the NFL had two teams travel to Mexico City, Mexico and play a game in front of more than 70,000 rowdy fans. This season, it was the New England Patriots taking on the Oakland Raiders. Unfortunately for the people in attendance, the game was not really that competitive.

The 3 amigos and the Patriots take on the Oakland Raiders in Mexico this evening. ?? VAMONOS!!!! pic.twitter.com/PUuV61a8qP

The Patriots take on the Raiders here in Mexico City at Estadio Azteca. #WBZ pic.twitter.com/BYkSTFcSAF

Fans in Mexico City love Tom Brady. There were BRA-DY chants during pregame and as the Patriots made a third-down stop.

A bad Hombre has arrived in to Mexico #patriots #NFLMexico #NFL pic.twitter.com/NdILcNROzE

Build the wall so the #Raiders can’t come back from Mexico.

Raiders suck in America and Mexico

After only 25 years, the city of Atlanta got rid of one of their most notable sporting venues in the Georgia Dome. The Atlanta Falcons called the Georgia Dome home for 24 years before they moved into the brand new Mercedes-Benz Stadium this season. A number of people were there to watch the implosion of the building, however, not everyone in the area was able to get a good view, including The Weather Channel.

Atlanta implodes the Georgia Dome in only the 6th worst collapse in Georgia sports history pic.twitter.com/avlne81Qyx

They should have imploded the Georgia Dome following the charge call on Brandon Triche.

Just watched the implosion of the Georgia Dome. Thank goodness that ancient, decrepit, outdated, horrific 25-YEAR-OLD STADIUM is gone. Is there an NFL COUNTDOWN CLOCK for the next implosion?

I am CRYING. The Weather Channel set up for a live shot of the Georgia Dome being imploded, and at the perfectly wrong time … this happened (via @ajc): pic.twitter.com/LA0cXpC7oX