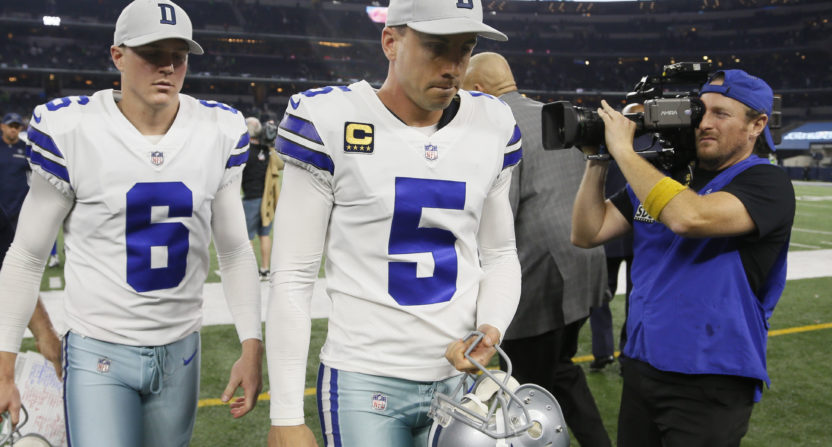 For some NFL teams with a large fanbase (Dallas Cowboys, Green Bay Packers, Denver Broncos, among others), 2017 has not been a fun season to watch. However, the lack of success by these teams has lead to some of the most entertaining reactions and posts on social media of the year.

After everything that went on in the league during Week 16, what were some of the best (or worst) posts on Twitter from those who cover and follow the NFL?

Marshon Lattimore catches a football with his backside

As the Atlanta Falcons were attempting to score some points before heading into halftime of their matchup with the New Orleans Saints, Falcons quarterback Matt Ryan threw a pass over the middle of the field that was tipped by one of his receivers.

But instead of the football just landing on the ground like what normally happens, the ball ended up falling on the lower cheeks of Saints corner Marshon Lattimore, allowing him to turn the play into an interception.

Can’t remember the last time I seen an interception like this. The ball fell right on Marshon Lattimore, Saints literally caught a break pic.twitter.com/5KyblxU9XJ

Marshon Lattimore famously mocked a draftnik this past year for commenting on his butt and his butt literally just made an interception. Had he been a flat-ass its questionable that he would have made that pick.

We’ve had a butt fumble, did we just have a Marshon Lattimore “Butt Interception” ?

After carefully considering various options from colleagues and via social media, I’ve decided name for Marshon Lattimore’s fateful interception: Fanny Pick. (Get it?)

Marshon Lattimore said he doesn’t like term “butt pick.” Hopes someone comes up with a better term for his wild interception.

Since becoming the San Francisco 49ers starting quarterback in Week 13, Jimmy Garoppolo has led the team to four straight wins. The 49ers’ hopes of tanking and getting a top three draft pick may be out the door now, but it looks like they have found themselves a franchise quarterback.

Since Jimmy Garoppolo took over the 49ers

4-0
316 yards passing per game
68.9 completion %
WRs and TEs have been setting career highs every week
Sacked just 2.25 times per game

There is still no reasonable argument that Jimmy Garoppolo isn’t the best QB ever.

Following their loss to the Seattle Seahawks last Sunday, the Dallas Cowboys were officially eliminated from making this year’s NFC playoff bracket. It is the second time in the last three seasons the Cowboys are missing out on the playoffs and a few people might have had a thing or two to say about it.

The mood in Dallas as Seattle has eliminated the Dallas Cowboys from the playoffs with a 21-12 victory#SEAvsDAL pic.twitter.com/m8zaWrbXY4

That face you make when the Cowboys can’t blame you for not making the playoffs anymore pic.twitter.com/3GuJfbJBBz

#Cowboys out of the playoffs is a Christmas present for America.

russell wilson eliminated the cowboys from the playoffs and his wife, ciara, moonwalked across their end zone.

lowkey most disrespectful thing i ever seen and i’m absolutely here for it. pic.twitter.com/s3YowZjnCh

2017 will mark the first time in the Super Bowl era that the Cowboys, Giants, Redskins, Packers, and 49ers all missed the playoffs.

The last time all 5 of those teams missed the postseason was in 1964.

After his Kansas City Chiefs celebrated their second-straight AFC West title by defeating the Miami Dolphins last Sunday, head coach Andy Reid looked a little more jolly than usual during his postgame presser. His players definitely got a kick out of it.

Andy Reid dressed up as Santa in the post-game presser. #Chiefs pic.twitter.com/XfEETXhQmd

Andy Reid really dressed up like Santa for postgame.

I am so so so in for this “fun” version of the Chiefs. pic.twitter.com/6bDUyaQl7Y

Nice try but there’s no way Andy Reid is actually Santa because the job requires being great at time management https://t.co/A9t7oa52yE

As the Buffalo Bills were attempting to win their road matchup against the mighty New England Patriots, Bills wide receiver Kelvin Benjamin thought he had a touchdown catch to put the team up heading into the half.

However, after the officials looked at the replay, it was determined to be an incomplete pass. Once again, the refs proved that absolutely no one knows what a catch is in the NFL.

Kelvin Benjamin doesn’t get credit for the TD catch. Had his foot and toe scrape but not given possession during that brief time. pic.twitter.com/7QyCvPOE1a

I know this tweet won’t be popular with Bills fans, but:
If you look closely, after Kelvin Benjamin has the ball with two feet inbounds, he goes back and celebrates with his teammates, and you can see the ball move a little in his hand. He didn’t complete the catch. Easy overturn

Just saw the Kelvin Benjamin TD catch that was overturned in New England.

I want to punch the #NFL in the face.

a lot of you are wondering why the Kelvin Benjamin touchdown did not count but the NFL’s rules explain it very clearly pic.twitter.com/IcizV55Fvx