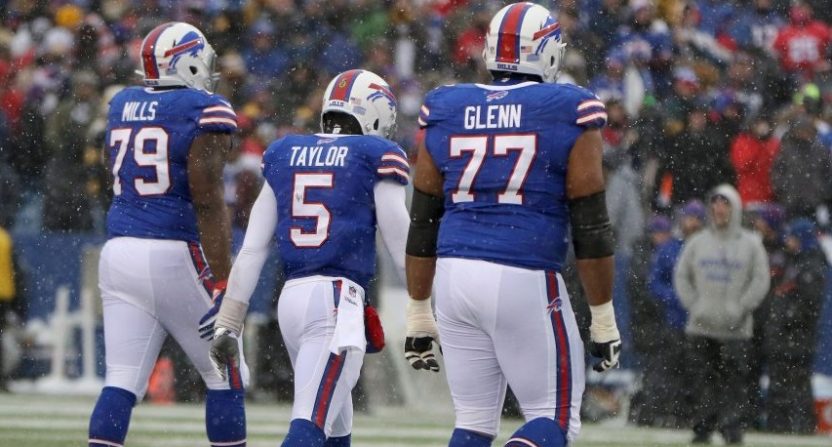 Anyone who was born in or after the year 2001 has at least one thing in common with each other. None of them has ever experienced a year of their life in which the Buffalo Bills were one of the 12 teams to participate in the NFL playoffs.

Once a storied franchise, the Bills are now more known for their fans getting obliterated and jumping through burning tables in the tailgate lots of New Era Field. OK, that’s kind of funny, but still.

Speaking of funny, since their last playoff game on Jan. 8, 2000, Buffalo has been nothing but a laughingstock of an organization. The Bills have gone 272 straight games without a postseason berth, easily the longest playoff drought for any team in the NFL.

Not only does Buffalo have the current record for most seasons without a postseason appearance in the NFL, they have the longest such streak of any team in all four major sports. Baseball’s Seattle Mariners have the second-longest postseason drought, absent from the playoffs for the past 15 years.

So how did a franchise that once played in a record four straight Super Bowls from 1990 to 1993 become the NFL’s current example of how not to properly run an organization?

It just might have to do with a little thing called patience, something the Bills’ front office has not possessed since Hall of Fame head coach Marv Levy retired in 1997.

Buffalo has had eight head coaches, two owners, and is currently in the process of hiring their seventh general manager since Levy’s departure. The Bills have also had 11 different quarterbacks lead the team in passing, nine different running backs lead the team in rushing, and eight last-place finishes in the AFC East during this same time period.

Part of this lack of continuity has been due to bad luck and the team just setting unattainable standards, as former Bills linebacker Takeo Spikes explained back in 2006.

“When you come into the city of Buffalo people expect you to win not later, not two or three years from now. People want you to win now. So it’s a lot of pressure.”

After missing the playoffs in the 2000 season with an 8-8 record, Buffalo owner Ralph Wilson Jr. fired head coach Wade Phillips for not dismissing the team’s special teams coach. Despite Phillips leading the Bills to the playoffs in two of his three years with the team, Wilson still decided on going in a different direction.

Phillips still has the highest winning percentage of any head coach in Buffalo that was hired after Levy.

Then in 2006, Mike Mularkey resigned as the Bills head coach with three years remaining on a five-year contract. Despite Buffalo coming off of a 5-11 season in 2005, Mularkey’s decision still came as a surprise to the organization.

Fast-forward 11 years and four head coaches later, the Bills have only finished with a winning record just once since 2006, when they went 9-7 in 2014 with Doug Marrone as the team’s head coach. But just when the team thought it was heading in a positive direction, Marrone resigned in an effort to land another coaching job elsewhere.

Now Buffalo is on their third head coach in the last four years with Sean McDermott, the latest to work under the unattainable expectations from the Bills’ ownership. If McDermott is going to have any shot to succeed, Buffalo actually has to give him more than two or three chances to do so.

Message to the Bills, McDermott is not the next Marv Levy and never will be. Also, Tyrod Taylor? Not the next Jim Kelly. Let them evolve and have a chance to develop their own legacy.

Instead of trying to recapture the success that the franchise experienced almost three decades ago, maybe Buffalo should focus on some goals that can actually be accomplished.

Start by finishing a season with a winning record. Then earn a spot in the playoffs and shoot for a division title. After that, maybe winning a Super Bowl can become an actual attainable reality.

But then again, Bills fans should already know that none of these goals will likely be accomplished until Tom Brady retires from the NFL. So until then, cheers to more broken tables and butt luges!