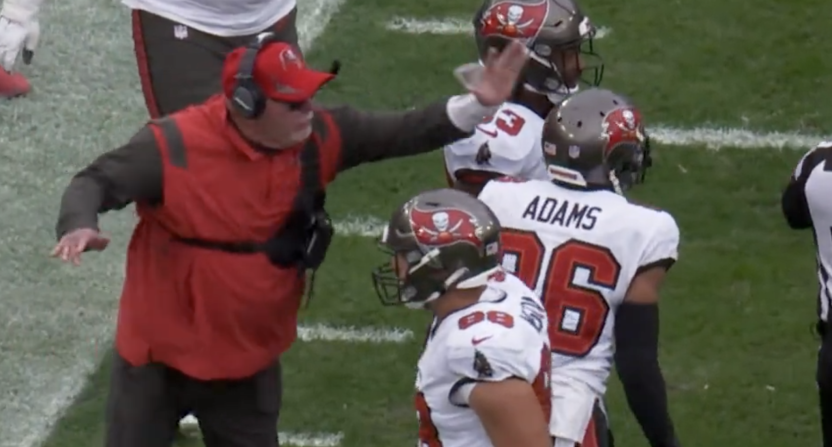 In Sunday’s playoff game between the Tampa Bay Buccaneers and Philadelphia Eagles, Bucs coach Bruce Arians was seen slapping safety Andrew Adams in the helmet and then pushing him with his elbow.

Was trying to prevent a taunt?pic.twitter.com/R4pvEXvRFI

Per the Tampa Bay Times, Arians said afterward that he was simply trying to make sure Adams didn’t get a penalty for attempting to pull Eagles players off the pile after a play. Arians also said that he did not regret the incident.

“No, and I’ve seen enough dumb,” Arians said. “You can’t pull guys out of a pile. We just got a big play, great field position, and he’s trying to pull a guy out of a pile, and I was trying to knock him off of that guy so he didn’t get a penalty.”

Regardless, it was a bad look for the NFL and for a head coach who had recently been accused of trying to insert a player into a game despite his injuries. Arians’ reputation has taken a few hits, no pun intended, as he’s been seen more and more as an out-of-touch aggressive coach and this incident didn’t help matters.

As of Monday, the league had not commented but there was a report that the incident was “being handled.” That handling appears to have happened now in the form of a $50,000 fine.

For Arians, who makes around $8 million/year for the Bucs, this is pretty much like asking him to donate a few pennies to the Salvation Army. So it’s more symbolic than anything.

The NFL made a big deal about sending a message about taunting and players being good role models for children. It doesn’t appear that they seem too concerned with sending the same message when it comes to coaches putting their hands on players, something that has come up a few times this year.