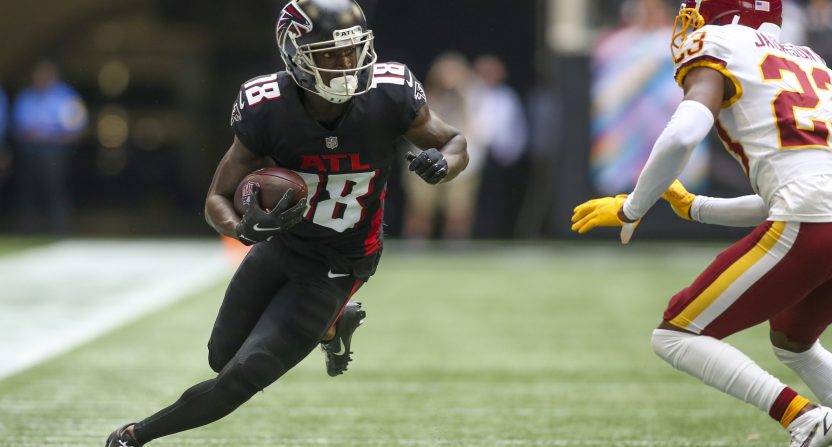 Last season, Atlanta Falcons wide receiver Calvin Ridley announced that he was stepping away from the game, missing the last 11 games of the year. He would later tweet that he was doing so out of concern for his mental wellbeing.

“These past few weeks have been very challenging,” said Ridley in October, “and as much as I’d like to be on the field competing with my teammates, I need to step away from football at this time and focus on my mental wellbeing. This will help me be the best version of myself now and in the future.”

Since then, both he and the Falcons have been decidedly quiet about Ridley’s status for the upcoming season. On Sunday, Ridley put up a cryptic tweet saying that he learns from his Ls (losses).

I learn from my Ls

Turns out, his status for 2022 is that he will not play because the NFL announced Monday that it was suspending the wide receiver for the entire season for gambling on NFL games.

#Falcons WR Calvin Ridley has been suspended a year for gambling on NFL games during the season.

According to the Falcons’ website, the league is saying that Ridley bet on NFL games during a five-day stretch in late November of last year while he was on the reserve non-football illness list. NFL insider Mike Garafolo reported that he placed those bets via his phone, which might explain how it came to light.

According to NFL commissioner Roger Goodell, the decision was about protecting the integrity of the game.

“There is nothing more fundamental to the NFL’s success – and to the reputation of everyone associated with our league – than upholding the integrity of the game,” said Goodell. “This is the responsibility of every player, coach, owner, game official, and anyone else employed in the league. Your actions put the integrity of the game at risk, threatened to damage public confidence in professional football, and potentially undermined the reputations of your fellow players throughout the NFL.

“For decades, gambling on NFL games has been considered among the most significant violations of league policy warranting the most substantial sanction. In your case, I acknowledge and commend you for your promptly reporting for an interview, and for admitting your actions.”

The Falcons released a statement of their own, saying they have cooperated fully with the investigation.

The Falcons’ sixth-round draft pick in 2018, Ridley can apply for reinstatement to the league on Feb. 15, 2023, and he has the right to appeal this suspension in the meantime.

The wide receiver has 248 receptions for 3,342 yards and 28 touchdowns in four years with the NFL franchise, who exercised his fifth-year option last spring.

It’s a shocking announcement in general, but especially at a time when the NFL is embedding itself with gambling companies and sponsors. The league’s sportsbook partners and advertisers spent over $21 million across NFL games on CBS, Fox, and NBC in the first week of this past season alone. It’s nearly impossible to be an NFL consumer and not be inundated with DraftKings and FanDuel advertising.

Since the Supreme Court struck down the Professional and Amateur Sports Protection Act in 2018, almost half of the U.S. population can now legally bet on sports in their state. Sports betting has simply become a huge business in pro sports in recent years and even the lines between sports journalism and gambling have been blurring as well. The point is that as sports gambling becomes more and more normalized and entrenched in the business of pro sports, it’s hard to imagine this issue won’t be something we see come up again and again.

In the meantime, reactions to the news about Ridley ran the gamut, from comments about him to the hypocritical standards of the NFL bathing in gambling money while chastising him for gambling.

"We regret to inform you that due to his shameful gambling, Calvin Ridley has been suspended from the Bet Rivers 2022 Regular Season sponsored by Draft Kings."

Scrolling through tweets about Calvin Ridley’s suspension … I’m getting promoted tweets from FanDuel and DraftKings on my feed.

Calvin Ridley was putting down 6 teams parleys on FanDuel WHILE ON THE PAYROLL??? pic.twitter.com/c9mKl6fUJI

"This type of behavior does not belong in the NFL or here in BetOnNFLGamesDotCom Stadium locker room!"

We don’t know the details of Calvin Ridley’s football betting, but considering sports games are blanketed with betting apps, it felt like a matter of time before we found out a player was betting on games.

I bet you Calvin isn’t the only one doin this. He’s just dumb enough to get caught.

You can expect this to be a major discussion point moving forward for all sports leagues, not just the NFL. Sports betting is here to stay and it’s a massive business. The question isn’t whether or not this will happen again, but when and how often.