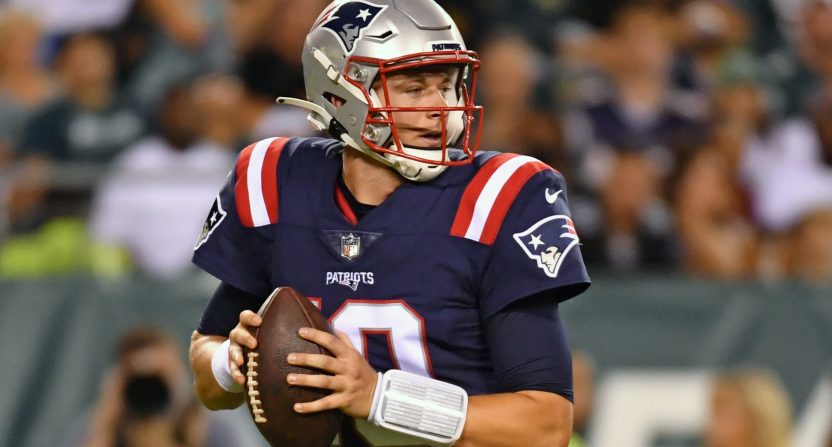 There’s not much more clarity in the New England Patriots’ quarterback battle through two weeks of preseason, but for a reason that Bill Belichick is surely fine with- both quarterbacks look good.

The Patriots annihilated the Eagles on Thursday night in Philadelphia, 35-0. Hey, it’s preseason and tons of backups are involved to skew the reality of what each team brings to the table, but it was a great showing by the Patriots and an ugly showing by the Eagles- as the score would suggest. Heck, the third play from scrimmage summarized how the game would go:

Newton got the start and went 8-for-9 with 109 passing yards, one touchdown, no interceptions, and a 151.4 passer rating.

Jakobi Meyers with a great effort to turn this Cam Newton pass into a Patriots touchdown. pic.twitter.com/7B8xZZtGMn

So, the 32-year-old Newton had full command of the offense and was very efficient. But the much more important big-picture story for the Patriots is with Jones, who followed up a rock-solid preseason debut with another impressive performance.

The Patriots’ 2021 first-round pick (15th overall) completed 13-of-19 passes for 149 yards and a 91.1 passer rating. He looked like a longtime veteran instead of someone in their second NFL game, showing off poise, pocket awareness, good footwork, and delivering strikes all over the field.

And just like last week, Jones threw a bomb that should’ve been caught (and would’ve provided a big statistical boost).

Mac Jones with a pretty deep ball, but N'Keal Harry drops it and injures a shoulder in the process. pic.twitter.com/0AM630j2fS

Mac Jones is 13 of 19 for 146 yards over four possessions. Of those six incompletions, there's been three drops and a spike.

It remains to be seen which direction the Patriots will go for Week 1 at quarterback, but they have to be very encouraged by what they’ve seen from Jones so far. And if they decide to be patient with the rookie quarterback, there’s a very capable veteran in Newton that can run the offense in the meantime.