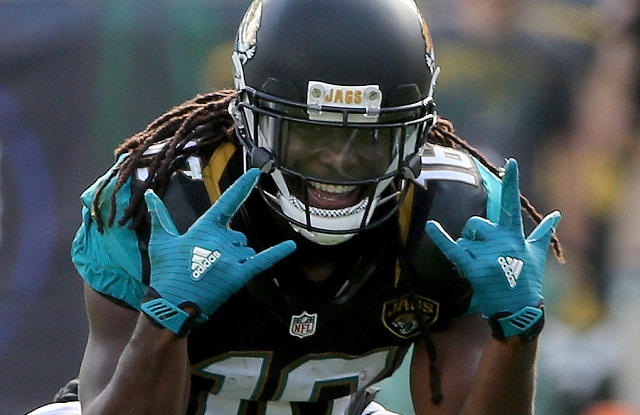 Few NFL teams have had as eventful an offseason from a talent acquisition standpoint than the Jacksonville Jaguars. It makes sense, to be sure: Head coach Gus Bradley is fighting for his job in his fourth season with the team and the Jaguars came into the 2016 league year with a glut of salary cap space and, as one of the few squads under the league’s minimum salary cap spending floor, needed to spend it.

As such, the Jaguars had one of the bigger free agency periods, followed by a strong draft that netted them two of the 2016 class’ top defenders.

These acquisitions — both via the draft and free agency, along with the return of injured 2015 first-round pick Dante Fowler Jr. — are hoped to be the the final missing roster pieces to turn the Bradley-helmed Jaguars’ fortunes around. In the past three seasons, the Jaguars have gone 4-12 (2013), 3-13 (2014) and 5-11 (2015), despite promising offseasons each time that led many to believe turning the corner was imminent. So while there is no guarantee that the Jaguars will finally blossom into contenders this year, their roster is at a point where it is as good as it has ever been during Bradley’s tenure.

Most of their additions have come on the defensive side of the ball, where the Jaguars ranked 31st in points allowed, 24th in yards allowed, tied for 26th in interceptions and tied for 20th in sacks in 2015. Their first big free agency signing was former Denver Broncos defensive lineman Malik Jackson, earning a six-year, $85.5 million contract in order to boost both their pass-rush and ability to stop the run. During four seasons in Denver, he amassed 14.5 sacks (technically in three seasons), with 5.5 of those coming in the 2015 season. He had seven passes defensed, two fumbles recovered, 5.5 sacks and 46 combined tackles for the Broncos last year.

The Jaguars’ next step was to bolster the secondary, bringing on former Cleveland Browns safety Tashaun Gipson and former New York Giants cornerback Prince Amukamara, the former on a five-year, $36 million contract and the latter on a one-year, $5.5 million prove-it deal, to serve as veteran depth. Outside linebacker Bjoern Werner was also brought aboard in an attempt to revive the career of the 2013 Round 1 Indianapolis Colts selection. Gipson, Amukamara and Jackson alone combined for 169 tackles in 2015. Gipson had 14 interceptions and 23 passes defensed over the course of four seasons. Amukamara had 10 passes defensed, though he appeared in only 11 games last year. It’s clear that the Jaguars brought aboard productive veterans to mix into their group of young and home-grown talent.

But their focus on the defense didn’t end there. Of their seven draft picks in 2016, six came on that side of the ball, including their crucial Rounds 1 and 2 selections. With those two picks, they took Florida State cornerback Jalen Ramsey, thought by many to be the very best player in the draft class, and linebacker Myles Jack, who was in the same conversation as Ramsey until teams became nervous about Jack’s surgically-repaved right knee. The Jaguars will also get another crucial young defender back from injury, with Fowler fully healed and ready to participate in training camp after tearing his ACL last May.

The net effect of these additions, it is hoped, is a far more aggressive defense from top to bottom, with an ability to rush the passer as well as create plays in the secondary. And in a wide-open AFC South, even a modest improvement on defense could have a major ripple effect on the Jaguars’ quest to dominate the division.

You might wanna wrap up that Allen Hurns guy.

Jacksonville didn’t entirely ignore the offensive side of the ball during the offseason. They signed receiver Allen Hurns to a four-year, $40.65 million deal in order to keep him in the fold as part of their one-two wideout punch alongside Allen Robinson. They also signed free agent left tackle Kelvin Beachum to a five-year, $45 million deal that virtually guarantees he will be starting ahead of the disappointing Luke Joeckel, who allowed 7.5 of the total 51 sacks on quarterback Blake Bortles last year, in addition to accounting for eight penalties. Running back Chris Ivory was also signed in free agency to a five-year, $32 million deal, with the plan for him to take over the Toby Gerhart role.

It should thus come as no surprise that the Jaguars are currently second in the league behind the Philadelphia Eagles in cash spending for 2016. But spending does not equate to wins and we all know than an NFL season is not won during the first few weeks of the league year. It cannot be said, however, that the Jaguars have spent the last few months embracing complacency or failing to make moves that they believe will drastically improve their fortunes in the upcoming season. And the quality of players acquired, both via free agency and the draft, also point to a better Jaguars team in 2016 than in 2015.

How much better? And will it be enough for Bradley to keep his coaching job at season’s end? That we do not know, but with training camps opening this week and the first opportunity for these new Jaguars players to work together in full pads, we’re not far away from finding out if Jacksonville can round the corner they’ve been loitering around for the last three seasons.