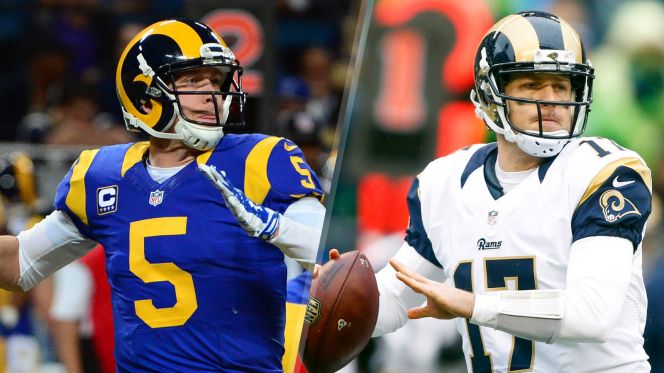 The Philadelphia Eagles and Minnesota Vikings were not supposed to be in the NFC Championship Game this season. And nobody in their right mind would have predicted the quarterbacks playing in this upcoming weekend’s NFC Championship Game would have been Nick Foles and Case Keenum before the season started. But as fate would have it, these two former teammates will now square off for the right to play in the Super Bowl in the most unlikeliest of NFC championship showdowns seen in quite some time.

For the sake of comparison, the Dallas Cowboys had -140 odds to make the playoffs and the Green Bay Packers had -340 odds to reach the postseason as the clear favorites in their respective divisions won by the Eagles and Vikings, respectively. Those odds obviously began to evolve as the season played on and the path to the postseason for every team adjusted along the way, but who would have guessed both the Vikings and Eagles would reach the NFC Championship Game the way they have when this season started?

Nobody. And the fact it will be Foles and Keenum taking snaps with the NFC title on the line goes to make this the ultimate story that suggest almost anything is possible in the NFL these days. The irony of these two teams facing in the NFC Championship is inescapable considering the franchise-shifting trade made between them just before the start of the 2016 season. Or the move the Eagles made with the St. Louis Rams before the start of the 2015 season.

Foles had elevated himself to being the starting quarterback in 2013 in the first year with Chip Kelly, completing an impressive 27 touchdowns with just two interceptions, but the follow-up season left something to be desired. In the spring of 2015, the Eagles traded Foles to the St. Louis Rams in exchange for Sam Bradford as the relationship between Bradford and the Rams was hitting a tipping point. The move gave both franchises a breath of fresh air at the quarterback position with guys that could step in and start with their new teams for the 2015 season.

The day after acquiring Foles from Philadelphia, the Rams pulled the trigger on another trade with the Houston Texans to bring Case Keenum in as a backup option. As the 2015 season played on and Foles struggled, Rams head coach Jeff Fisher made a quarterback change and gave the starting job to Keenum.

“What if I told you…” pic.twitter.com/gQc0GX4k8h

It's not Jeff Fisher's fault he's 7-9! No coach could win with such crappy quarterbacks! pic.twitter.com/dMvMxewt6n

At the end of the 2015 season, the Rams began preparing for a move to Los Angeles. Unhappy with the future outlook of the quarterback position, the Rams began scouting quarterbacks for the 2016 NFL Draft, ending up with Jared Goff as the first overall pick in the 2016 NFL Draft. The writing was on the wall, and somebody was going to be out of a starting job soon enough.

It was Foles who spoke up and requested to be released by the Rams so he could explore other opportunities, which resulted in a one-year stint with the Kansas City Chiefs. As time passed, Foles warmed up to the idea of being a backup to another potential franchise quarterback, and he made a return to Philadelphia to back up Carson Wentz. As fate would have it for Foles, he entered a game against his former team, the Rams, when Wentz tore his ACL. Foles helped keep the Eagles on top of Goff and the Rams to stay atop the NFC standings.

Meanwhile, Keenum had also fallen behind Goff on the depth chart in Los Angels toward the end of the 2016 season. As Goff became the guy the Rams were hoping for, Keenum went off looking for his next job. He headed to the Minnesota Vikings, where he would quickly step into the spotlight in relief of an injured Sam Bradford.

Bradford’s role in this tangled web is not to be overlooked. Just prior to the start of the 2016 season, the Eagles traded Bradford to Minnesota after the Vikings lost Teddy Bridgewater to an injury. That opened the door for the start of the Wentz era right from Game 1 of his rookie season. As Bradford was lost to an injury in Minnesota and Bridgewater was not quite ready to play yet, it was all on Keenum to keep the Vikings offense moving.

Just think about that for a moment. A year after trading Foles to St. Louis where he would be teammates with Keenum, the Eagles traded Bradford to Minnesota where Keenum has become the inspirational story of the season in the NFL. Now, both Foles and Keenum will be the quarterbacks vying for the NFC championship. What a crazy twist of fate for the NFC Championship Game this weekend.