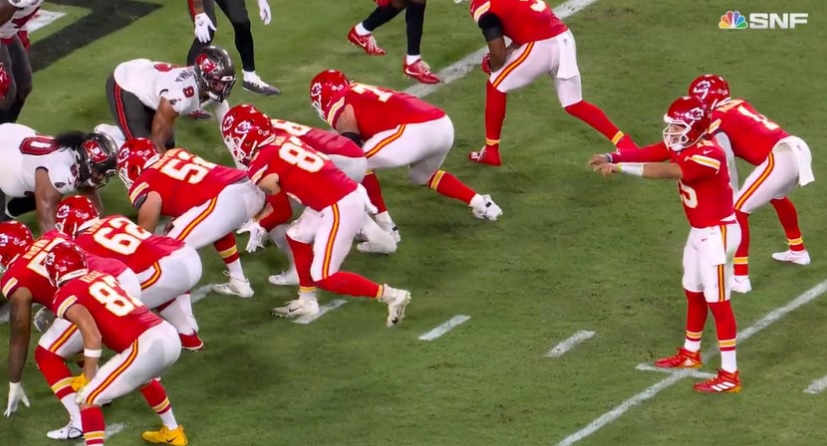 As fun as Patrick Mahomes can be to watch, we don’t imagine that it’s a lot of fun playing against him. The Kansas City Chiefs scored two touchdowns in the second quarter of Sunday night’s game against the Tampa Bay Buccaneers. One showed why defenders must keep their attention focused on Mahomes at all times. The other showed how that can go awry.

Mahomes showed off his immense improv skills with a long scramble capped off by a short touchdown pass to Clyde Edwards-Helaire. Later in the second quarter, Mahomes and the Chiefs were on the goal line again, just short of scoring. Naturally, the Buccaneers were focused on Mahomes. That opened the door for Kansas City to score a touchdown without Mahomes even touching the ball.

Mahomes lined up in the shotgun and started looking and motioning to his left. Tight end Noah Gray, meanwhile, was in motion, coming in from Mahomes’ right. Only, after initially running by center Creed Humphrey, Gray quickly shifted back under center. Humphrey then snapped the ball and Gray ran into the end zone from one yard out, scoring on what was effectively a quarterback sneak.

Fresh from our bag of tricks 🪄

Several in the NFL world marveled at the latest play to come out of Kansas City’s immense bag of tricks.

i need to know if this will work a second time against a dif opponent or if this is a one time only thing https://t.co/M5i68uKmZt

Mahomes better acting than all the Twilight films combined. https://t.co/abl0E10ibq

Truthfully, the Buccaneers played this about as well as possible. If you’re playing the Chiefs and focusing on Gray, bad things are going to happen. Given how many weapons they have and how good Mahomes is on his feet, the only real way to stop the Chiefs on the goal line is to hope for a mistake. That doesn’t happen too often.