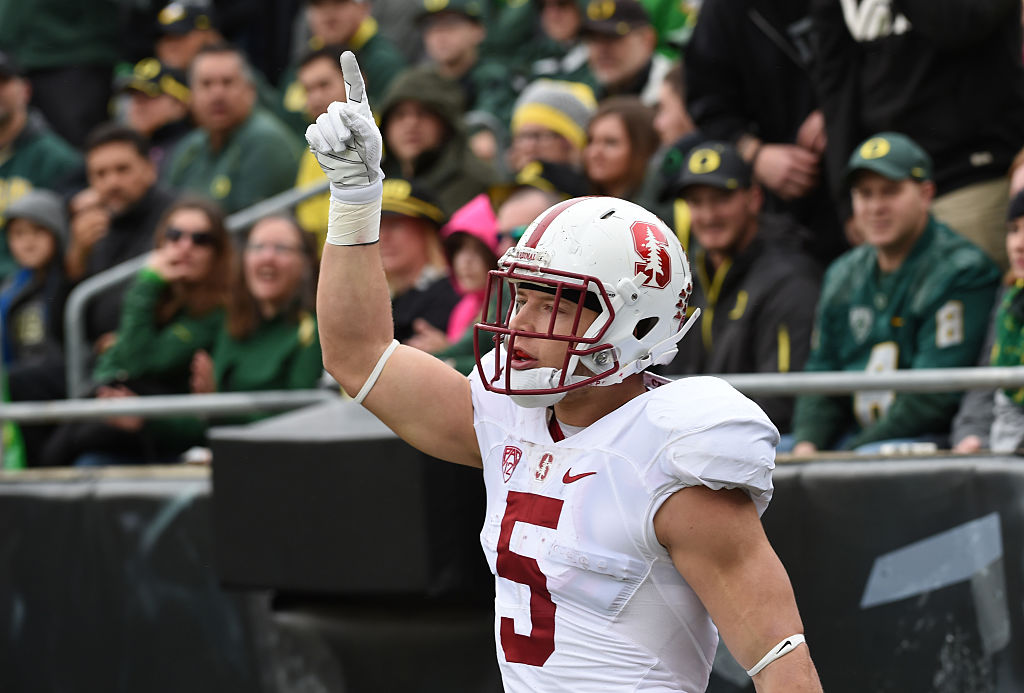 Christian McCaffrey had a terrific career at Stanford University. On Wednesday, the running back announced what had long been expected: he was going to forego his senior year at Stanford and and declare for the 2017 NFL Draft.

While McCaffrey immediately becomes one of the top running back prospects in the draft, you have to wonder if his stock took a hit during the 2016 season after a terrific 2015 for the Stanford Cardinal. While his numbers took a hit in 2016, it’s important to keep in mind that McCaffrey played in 14 games in ’15 compared to just 11 so far in ’16. Here’s how his numbers compare:

On the whole, you still have to wonder if the running back dropped on draft boards from 2015 to 2016. Despite not being draft eligible after the 2015 season, McCaffrey was looked at as one of the best players in college football. He received 290 first place Heisman votes and finished second for the prestigious award behind Alabama’s Derrick Henry.

This year, McCaffrey isn’t one of the five Heisman finalists and as recently as November 29th finished tied for eighth among Heisman candidates in a poll of ESPN experts.

Despite all these numbers showing McCaffrey was worse in 2016 than 2015 and recent announcements that he won’t be a Heisman finalist, McCaffrey’s stock didn’t take as massive hit. Did it lower a little bit? Probably. But it’s not like the running back most likely won’t hear his name called during the first round of the 2017 NFL Draft on April 27th of 2017.

Here is where McCaffrey currently stands on different NFL big boards along with commentary by various NFL Draft experts.

According to ESPN, before declaring for the draft, McCaffrey talked with former Stanford running back Toby Gerhart about moving to the NFL.

Here is what CBS had to say about McCaffrey:

“Despite Stanford’s struggles, McCaffrey has proven every bit as dynamic as in past seasons — quietly again leading the Pac-12 in rushing (145.7) and all-purpose yards (211.5) per game. With his easy agility, instant acceleration and soft hands, he reminds me of another former Pac-12 star, Reggie Bush. Like Bush, McCaffrey lacks the bulk to be a true bell-cow back at the next level but I believe that he possesses the athleticism and receiving skills to potentially handle slot receiver duties, as well.”

Here is what SI had to say about the Stanford running back:

“It’s pretty special when an athlete can be as smooth moving horizontally as he is getting vertical. McCaffrey is effortless in his cuts, and he picks out his lanes for them with excellent vision. What he can add as a returner and pass catcher solidifies his chances for a long, productive career.”

So what does all of this show? McCaffrey’s stock didn’t take a major hit, but at the same time, it didn’t rise as much as people might have thought.

A lot of people argued that McCaffrey should’ve won the 2015 Heisman over Henry, but that might have just been because most people don’t like Alabama. Henry was much better than McCaffrey last year:

Anyway, regardless of whether he should’ve won the Heisman or not, McCaffrey looked destined for a tremendous 2016 and was an early season Heisman favorite. But sadly the running back’s numbers slipped and he never lived up to the 2016 many people thought he would. Despite that McCaffrey still looks like a top running back for the 2016 Draft who would be a welcome addition to most team’s backfields.

McCaffrey will have one more attempt to woo NFL scouts at the 2016 Sun Bowl on December 30th at 2:00 pm EST when Stanford takes on the University of North Carolina. The Sun Bowl will air live on CBS.