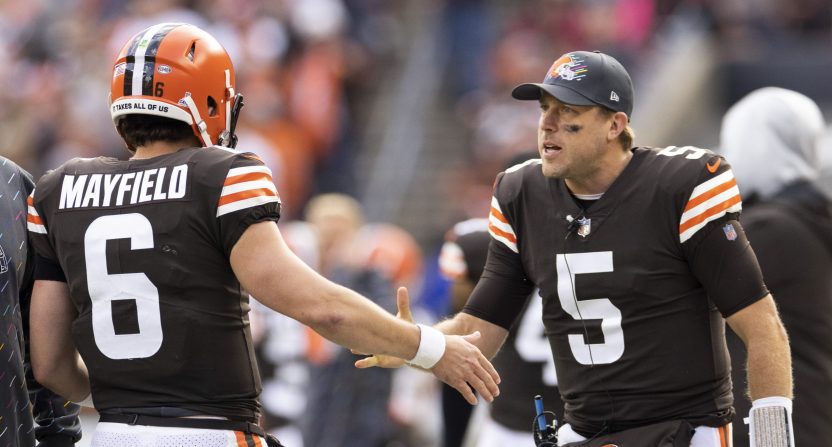 Despite the fact that Cleveland Browns quarterback Baker Mayfield aggravated the torn labrum in his non-throwing shoulder this past weekend, he was working this week under the impression that he would start for the team on Thursday night when they take on the Denver Broncos.

The Browns made the official announcement on Wednesday that Mayfield would not, in fact, be their quarterback on Thursday. Instead, Case Keenum is getting the start.

Mayfield had made it clear earlier in the week that he had every intention of playing on Thursday night, though he did say that he would step aside if he felt like he wasn’t going to be able to help the Browns win.

“Obviously if I was in a physical state where I wasn’t able to play to the best of my abilities and I was hurting the team, I wouldn’t do that because I care about winning,” said Mayfield. “Only I know how my body feels. If anyone questions whether I’m hindering the team and going out there injured, that’s just not right. It’s my decision. I get to say whether I’m able to play or not, and that’s just how it is.”

The Browns could be in real trouble on Thursday because along with Mayfield, they’ll be without their top running backs as well. Nick Chubb and Kareem Hunt have already been ruled out for Thursday’s game.

It’s not yet known if Mayfield will be back for the Browns’ next game or if he’ll need more time off to recover. It’s also possible that he might need season-ending surgery.

Keenum is in his ninth year in the league, having played for six teams in that time. He’s appeared in two games this year for the Browns, going 5 of 10 for 46 yards in spot duty.