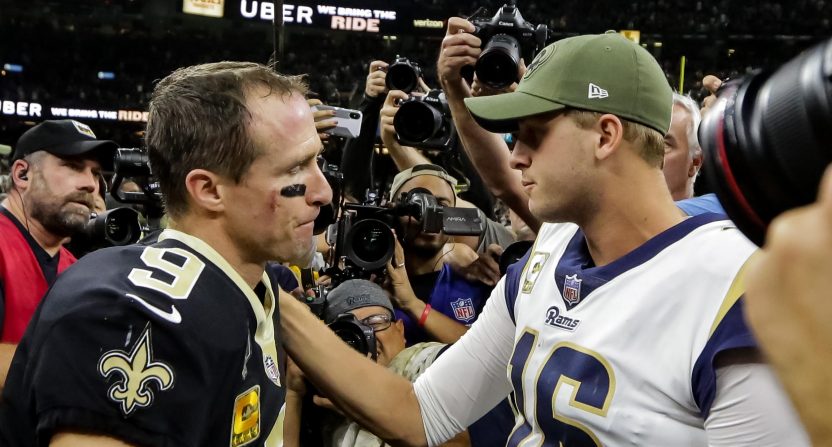 Prior to the start of every NFL season, Jimmy Kempski of PhillyVoice goes through every NFL roster and ranks them from youngest to oldest.

This year, the Los Angeles Rams entered the year as the league’s fourth-youngest team, while their NFC title game opponent, the New Orleans Saints, were the NFL’s ninth-oldest team. Meanwhile, the Kansas City Chiefs were the league’s 13th-youngest team, while their AFC title game opponent, the New England Patriots, were the NFL’s third-oldest team.

More critically, the Patriots and Saints possessed the two oldest quarterbacks in the NFL — 41-year-old Tom Brady and now-40-year-old Drew Brees. While among the league’s 32 opening-day starters at the most important position in the sport, only Jets rookie Sam Darnold was younger than Chiefs starting quarterback Patrick Mahomes, and only Darnold and Mahomes were younger than Rams starter Jared Goff.

That’s why Sunday’s games could have a torch-passing vibe, especially if Mahomes and the Chiefs and Goff and the Rams are both victorious over significantly older and more accomplished counterparts.

Meanwhile, just last year, Rams coach Sean McVay became the youngest head coach in modern NFL history. But New England’s Bill Belichick is the league’s second-oldest coach and already the oldest winning coach in Super Bowl history. McVay would be the youngest man ever to coach in a Super Bowl.

From that, it’s entirely reasonable to conclude that the Rams and/or Chiefs might not be ready for the torch. And indeed, it’s entirely possible Brady and Brees and Belichick and veteran Saints head coach Sean Payton aren’t ready to hand it over.

If that’s the case, Super Bowl LIII will be the first game in the history of professional football between two quarterbacks who are in their 40s.