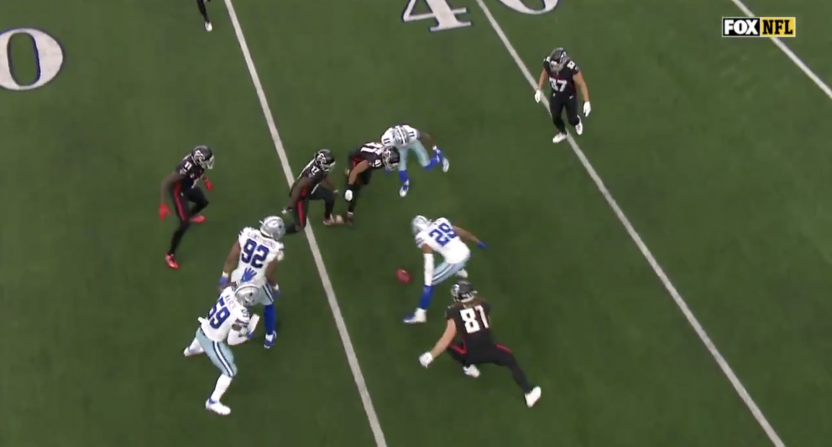 The Atlanta Falcons got some 28-3 vibes today as they blew a 20 point lead against the Dallas Cowboys en route to a 40-39 Cowboys victory. The Cowboys, thanks to three Dak Prescott rushing touchdowns and an onside kick, completed the comeback and defeated the Falcons in a wild game in Dallas.

After the first quarter, it appeared the Falcons were going to run away with things. Up 20-0 by the end of the first quarter, they were still in command at halftime up 29-10. Then in the third quarter, Prescott picked up a pair of short-range rushing touchdowns to really start the comeback. Suddenly, by the start of the fourth quarter, it was 29-24.

To the Falcons’ credit, they answered the Cowboys’ big third with 10 points of their own to start the fourth. They went from leading by 20 to only being up by five and then got the margin back up to 15 with just eight minutes left in the game.

The Cowboys came back though and with just five minutes left, they scored to get the margin to single digits. After missing the two-point conversion, the Cowboys were down nine but they quickly got the ball back and almost immediately scored another touchdown.

Down by two, here is where things really got interesting. Without timeouts, the Cowboys needed to convert an onside kick to have a chance to win. Kicker Greg Zuerlein got a bit creative and side-kicked the ball in order for it to look like it wouldn’t go the required 10 yards. Then at the last moment, the ball curved back and once it passed 10 yards, the Cowboys pounced on the ball to win possession. Zuerlein kicked the last second field goal to seal the win.

Wow! Zuerlein with a bit of English on the onside kick. And kicks the field goal to complete the Cowboys comeback! pic.twitter.com/HD7XBy5Dqr

What. A. Kick. @dallascowboys pic.twitter.com/yK18EUGKH0

Here’s where people have every right to say the Falcons choked. The Cowboys couldn’t touch the ball on the onside kick unless it went 10 yards but the Falcons could. No one on the Falcons’ hands team bothered to fall on the ball while it was rolling around all that time. Any Falcon does that, and holds onto the ball, the game is over. Instead, they kept the ball alive and the Cowboys took advantage.

Not taking anything away from the Cowboys, but that was a failure of Falcons coaching and the players for lacking situational awareness. The sports talk shows will have content all week from this game, and there will be a bunch of talking points worth discussing. The Falcons could’ve prevented all that and gotten a win if someone simply knew the rules.