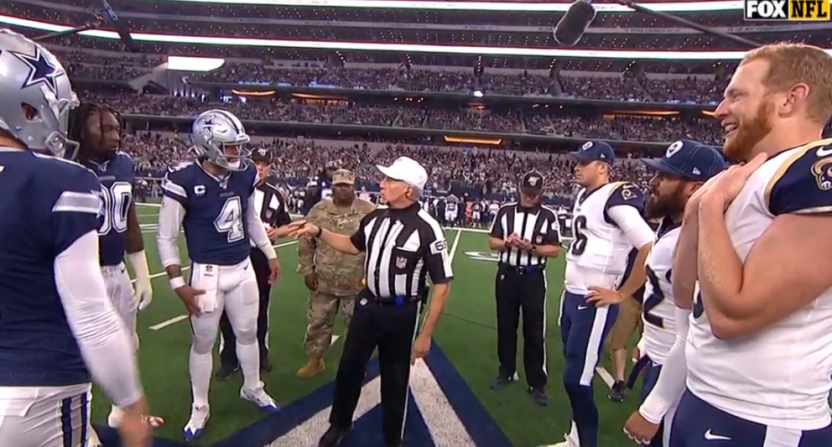 The NFL has a few memorable coin toss incidents, perhaps most memorably when referee Phil Luckett blew the call from Jerome Bettis ahead of overtime against the Lions on Thanksgiving Day, 1998.

Today we got another moment rivaling that one, as Dallas won the opening coin toss ahead of their game against the Rams. Dak Prescott, after conferring with teammates, said he wanted to kick, then said defer and kick. Unfortunately for them, referee Walt Anderson went with the first words, meaning rather than deferring to the second half, the Cowboys had made the choice to kick.

Dak Prescott didn’t use the word “defer” after Dallas won the pregame coin toss. Because of that, the Rams started the game with the ball and will receive to start the 2nd half. pic.twitter.com/VJDeGIIoTo

That meant that the Rams would get the ball to start the game, and also get option to choose to receive to start the second half, which they’ll almost certainly do.

Dysfunctional teams do dysfunctional things: Cowboys somehow screwed up the choice to defer and will kick to start each half of this game.

Later, the broadcast gave us more audio from the exchange, in which Prescott does eventually say they want to defer, but not until after saying they want to play defense, kick, and kick in a specific direction.

The coin toss isn’t reviewable, and it’s hilarious that a situation arose in which that would be a necessary thing to point out. Something similar has actually happened before, though not in the NFL; in 2014, Texas elected to kickoff after UCLA won the toss and deferred, meaning UCLA received the ball twice.

It’s still not clear whether or not the Cowboys will indeed be forced to kick twice, but at this point it seems like the likely outcome.

UPDATE: Actually, they ended up giving the ball to the Cowboys to start the second half after an intervention from the league office!

Mike Pereira chimed in to say that the league felt they could get involved and overturn the decision based on game administration rules. McVay not being told of the decision until the half was about to start, though, is kind of a big deal; the Rams are down 28-7 and it probably wasn’t going to matter, but it can certainly have an effect on how the end of the half played out in retrospect.