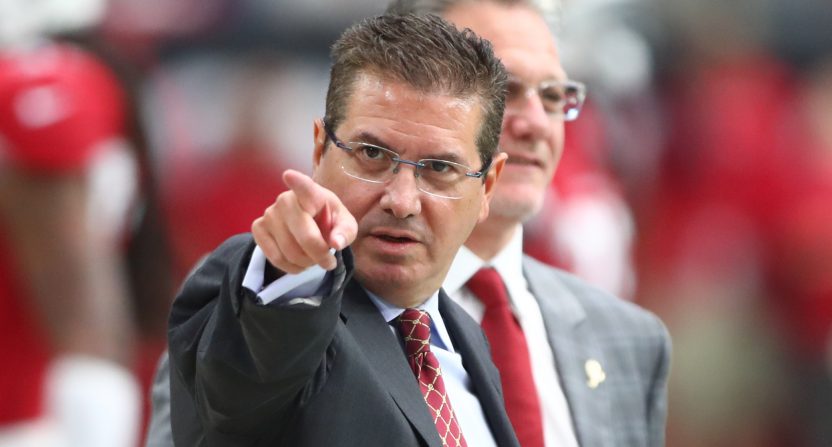 While he doesn’t have time to testify (in-person or virtually) before a Congressional inquiry, or even coordinate reception of a subpoena, Washington Commanders‘ owner Dan Snyder apparently does have time to order his spokespeople to attack media outlets that cover him. When asked for comment on a Washington Post story from Nicki Jhabvala, Liz Clarke and Mark Maske published Saturday, titled “Daniel Snyder was not ‘hands off’ as an NFL owner, witnesses told committee,” a spokesperson for Snyder  responded with no discussion of the specific allegations, but rather with an attempt to impugn the character of the Post and its reporters:

Offered the opportunity to respond to the specific allegations laid out in the Oversight Committee’s materials, a spokesperson for Dan Snyder issued the following statement:https://t.co/rsBHBadcdd pic.twitter.com/qp6DvTULSQ

As Mike Florio notes at Pro Football Talk, that’s a hilarious statement from someone representing Snyder for several reasons:

First of all, they’re not really “attacks.” They’re instead fair reporting and analysis of a horribly bad workplace situation that has yet, as far as anyone can tell, to result in true and meaningful accountability. Second, they’re not baseless; Snyder deserves to be criticized for the organization he ran, whether he was there every day or simply showed up periodically while others engaged in the more regular alleged misconduct. Finally, they’re not really “constant.” Given the significance of the story, in light of the fact that things are otherwise as slow as they get when it comes to NFL news, it’s a fair and proper amount of attention — especially when the league and the team continue to hide behind the offensively disingenuous idea that, because some employees requested anonymity during the investigation, all things learned must be forever concealed.

Through it all, it’s unclear whether Snyder has, or hasn’t, defied the arrangement that required him to refrain from his day-to-day role. When the Commissioner testified on June 22 that Snyder currently isn’t performing those functions “to the best of my knowledge,” the Commissioner was trying to avoid stepping into a perjury trap, given the very real possibility that Snyder is doing what he damn well pleases. It is, however, clear that the Committee continues to be unable to serve him with a subpoena, and that he refuses to accept service on his superyacht or wherever he’s currently hiding.

And it’s notable that while Snyder (seen above on the sidelines during a 2018 game against the Arizona Cardinals) would very much like to shift the focus to the Post, that’s not really what’s at issue here. What is at issue is exactly what role he’s played with the team during both long-past and recent controversies, with the latter particularly notable thanks to debate on if he is or is not “hands-off.” So far, Snyder has proven unwilling to address that, whether before this Congressional committee voluntarily, before it under subpoena, or in either interviews with or statements to media outlets. His latest statement is another deflection, and another indication of him not actually talking about anything notable.