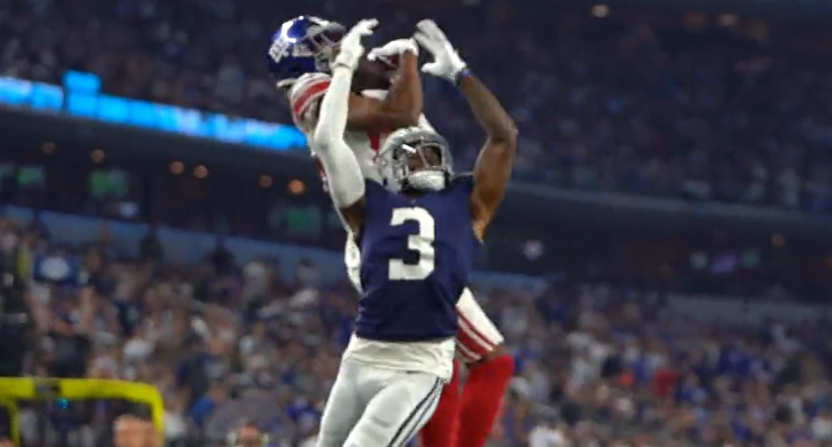 Darius Slayton just made one of the best catches of the year.

The New York Giants receiver set the team up to plunge into the end zone with an unbelievable grab. Slayton caught a deep pass by quarterback Daniel Jones in insane, spectacular fashion. The Giants receiver went up and challenged Dallas Cowboys cornerback Anthony Brown for a ball high up in the air. Suffice it to say, Slayton won the battle for the ball.

OHHHH WHAT A CATCH!!!

There have already been some amazing catches this NFL season. Justin Jefferson set the pace with his incredible grab against Buffalo earlier this season. While that might be up for the GOAT argument, this one is pretty damn good itself.

To add more magnificence to the catch, the Giants followed it up well. They scored on a rushing touchdown on the doorstep by Saquon Barkley two plays later. Slayton’s assist to the Barkley touchdown might be remembered fondly if the Giants steal the game from the Cowboys.

The NFL world reacted with sheer amazement to the awesome catch by Slayton.

DARIUS SLAYTON SNATCHED IT OFF OF HIS HEAD 🙌 😳 pic.twitter.com/Br2GZ0z4nd

Darius Slayton rewriting his entire career at this point.

What a catch by Darius Slayton. Wowowow!

Darius Slayton, are you serious? pic.twitter.com/GchOYIWYyh

The Giants trying to find a way to trade Darius Slayton, and the rest of the league saying no, was such a perplexing offseason storyline

What a catch. Darius Slayton is one of the most underrated players in the NFL and in fantasy.

He’s been WR21 in PPR over the past month.

Big-time catch by Darius Slayton over Anthony Brown sets up a 1-yard TD run by Saquon. Great throw by Jones under heavy pressure in his face. Key play on that was the catch by Richie James to convert a third-and-3.