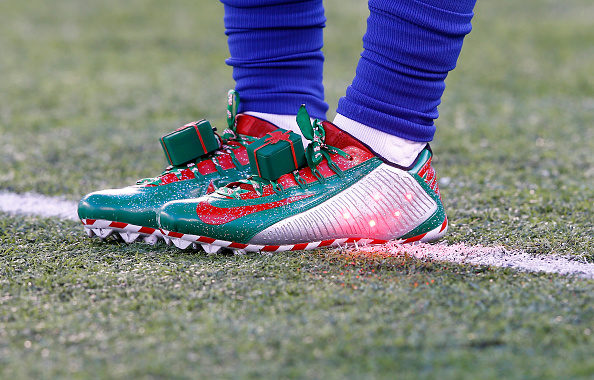 The top tweet on Pittsburgh Steelers running back DeAngelo Williams’ Twitter page is a video he made for breast cancer awareness. “My hair is pink, my toenails are pink and my heart is pink.”

The spot was produced by the NFL in conjunction with the American Cancer Society. Williams states unequivocally that he will wear pink the rest of his career. What Williams didn’t mention in the video, or if he did it was cut by the powers that be, was that the NFL will fine him, or any player, for wearing pink at any time other than Breast Cancer Awareness Month in October. The reason Williams has pink streaks in his hair is because the NFL won’t allow him to wear pink as part of his uniform, even his shoes.

And speaking of shoes, the tweet just under the top tweet on Williams’ page—the one he published in the wee hours of Tuesday morning—is this:

If that’s not the ultimate troll job to the NFL, I don’t know what is. Williams tweeted an NFL memes account that pointed to the shoes Odell Beckham, Jr. wore during pregame of the Giants-Panthers game on Sunday. While everyone in the country is focused on the suspension-worthy antics Beckham showed during the game, Williams wanted to point out the fine-worthy attire OBJ wore before the game.

Let’s not forget—let’s never forget—the NFL denied Williams’ request to wear pink to honor his mother the entire season, not just in October. The NFL also fined Williams $5,787 in October “for wearing “we will find a cure” and a pink breast cancer awareness ribbon on his eye black.”

Williams’ tweet failed to point out—or chose not to, as retweeting the image was more about making a point than calling out another player to get fined—that Beckham didn’t actually wear the cleats in the game, and players are allowed to essentially wear (or carry) anything they want in pregame.

Still, of you look at this picture above, Beckham wasn’t exactly wearing Giants-blue cleats during the game. His shoes look a heckuva lot closer to Carolina’s version of blue than the Giants.

If blue is subjective, isn’t red? If Beckham can wear light blue, what’s stopping him from wearing light red? And what’s light red if not pink?

So could Beckham wear pink shoes this season? If Williams played for a team that’s blue and red, not black and yellow, could he also wear light blue and/or pink shoes?

This is the situation the NFL finds itself in, with people speculating about shoe hue. Yes, I said it, shoe hue.

Moreover, it’s 2015. We live in a world where soccer players change the color of their boots almost every game. NBA players have some of the wildest styled footwear on the planet, and kids (and adults) love it, and buy version after version of the new shoes by the boxloads.

Letting NFL players show personality on their feet would humanize players stuck inside helmet and pads all game. Of course, letting a guy wear a little pink sweatband would be humanizing too. Which was Williams’ point all along.