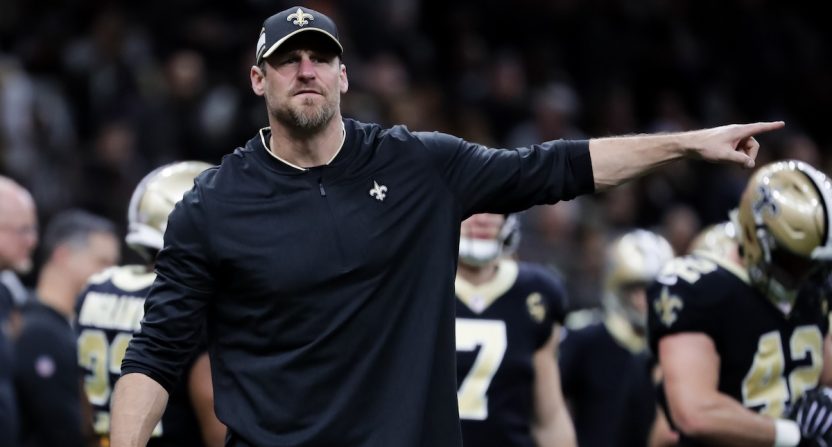 Six years is a significant commitment. But in signing new coach Dan Campbell to a contract of that length, the Detroit Lions are showing that they know the team and organization are a major rebuilding project.

Five years seems to be the standard deal for a new NFL coach. That’s the length of Robert Saleh’s agreement with the New York Jets. Exact terms haven’t been announced with the league’s other new coaches: Arthur Smith with the Atlanta Falcons, the Los Angeles Chargers and Brandon Staley, and Urban Meyer with the Jacksonville Jaguars.

But the guess is that they each signed for approximately the same length. (Campbell’s predecessor in Detroit, Matt Patricia, got a four-year deal.) These coaches need a year or two to change over their rosters and install their systems. Ideally, each of those coaches is leading a playoff or Super Bowl contender by the end of those contracts and working on an extension.

Yet the Lions went one more year with Campbell. Sure, that indicates an investment in their new coach. (By the way, it’s one more year than new general manager Brad Holmes received.) The contract shows they believe in him and his turnaround plan.

Here’s another clip after from the first Miami Dolphins practice after Dan Campbell was named the interim head coach. This is what the Lions need. #OnePride pic.twitter.com/eXHjOasTZs

But that extra year also seems to hint that Lions management realizes that this whole operation needs to be demolished and built back up. The roster, especially on defense, is bleak and lacking talent. Detroit’s defensive line can’t rush the quarterback or stop the run. The linebackers look like the slowest corps in the NFL. Only the secondary shows any upside at all. Should it be a surprise the 2020 team gave up the most points and yards in franchise history?

It’s not much better on offense, though the offensive line shows promise, and running back D’Andre Swift could be a potential star. Yet it will be even worse if quarterback Matthew Stafford is traded, which seems like the direction to go if the team is rebuilding. Get some draft capital in return for Stafford and let him play the final two years of his contract for a contender.

This is a project that will take some time. And unless Campbell is an utter disaster, he’ll get that time.

“Culture” is an overused word in football today, both in the NFL and college. But that’s largely because it really does matter. A mindset and philosophy have to be established. Players have to buy in and accept that they won’t lose because of schemes,  decision-making, and roster building. They have to be coached to best utilize their talent. None of that happened under Patricia and previous GM Bob Quinn.

Man I would absolutely love if the @Lions hired Dan Campbell as their next HC. Played with Dan-awesome leader. Great teammate. Toughness embodied and well connected throughout the league to assemble a strong staff.

Former Lions linebacker Chris Spielman clearly believes culture is important in building an organization and roster. Hired in December as a special assistant to team president Rod Wood, he has obviously pushed the front office to emphasize development (Holmes was the Rams’ director of college scouting) and toughness.

Spielman left behind a broadcasting career with Fox Sports, showing that he wasn’t just taking an empty position capitalizing on his popularity with fans. His fingerprints are all over the Campbell hire and he likely had a major influence over adding Holmes as well.

Yet the Lions appear to have made an unconventional hire with Campbell, who played three seasons in Detroit. That’s drawn snickers and derision from fans and observers skeptical of a perennially losing franchise straying from the standard path. An offensive or defensive coordinator oversees an entire unit, which is viewed as ideal preparation for running an entire team. Those guys usually advance to head-coaching positions.

Campbell was a tight ends coach with the New Orleans, though he also had the title of assistant head coach. (And unlike the coordinators being interviewed and getting hired, Campbell has some experience leading a team, working as the Miami Dolphins’ interim head coach for 12 games in 2015 after Joe Philbin was fired.) Based on those who cover the NFL, it doesn’t appear that Campbell was under consideration for any of the other six head-coach openings around the league.

Congrats to Dan Campbell. This is a great hire by the @Lions. He’s a hell of a coach. https://t.co/4rYtAKhAa1

But the Lions aren’t a team that will improve with a better offense or stronger defense. The entire operation, on and off the field, needs to be upgraded. The culture — there’s that word — needs to change. And a coach who has his face buried in a play-call sheet throughout a game or one who covets defensive linemen and their pad level might not be looking at the entire picture. That’s not what Detroit needs at this point.

Campbell isn’t an offensive or defensive guru, but he sure looks like a guy who demands toughness from his players, who instills a nasty, aggressive mindset. That’s different from being nasty to players and eroding their will, as Patricia reportedly was to the point that they wanted nothing to do with him. Campbell’s guys want to play hard for him. He’s a leader, not a bully.

Yes, this is all a risk. Campbell hasn’t put together his coaching staff yet, and his offensive and defensive coordinators will be important, likely making up for the head coach’s shortcomings. (Saints defensive backs coach Aaron Glenn is reportedly joining Campbell in Detroit.) It’s uncertain what his philosophies are in establishing how they play, in addition to how he and Holmes will build a team.

But nothing else has worked previously for the Lions. Not hiring a hotshot coordinator like Jim Schwartz, somebody with a solid reputation such as Jim Caldwell, or a coach associated with success as Patricia was with Bill Belichick in New England. This is something different, something new. Why not try it?