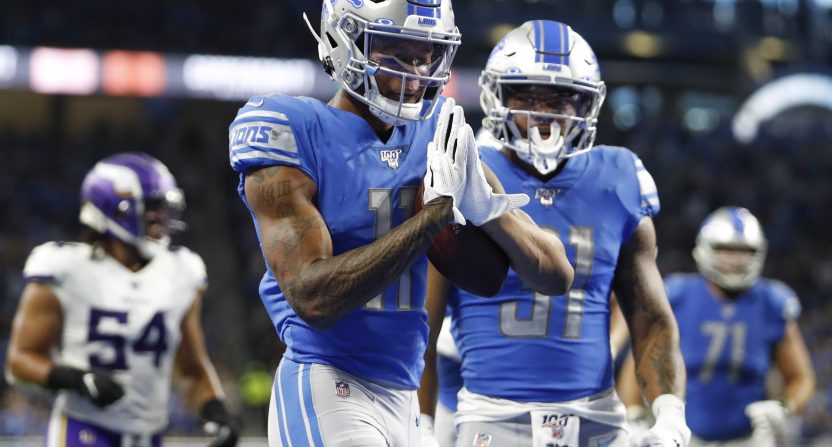 Detroit Lions wide reciever Marvin Jones has had a pretty decent 2019 season so far. He came into this week with 20 receptions for 294 yards and a touchdown. Not the kind of numbers that burn the house down but, hey, not too shabby. So if you happen to have Marvin on your fantasy football team, we suppose you may or may not have put him in the lineup this week.

If that’s the case, we really, really, really hope you did put him in your lineup. Otherwise, you are probably not very happy right now. Regardless, Marvin Jones is pretty happy following a four-touchdown day against the Minnesota Vikings.

Jones got the Lions on the board first with a nifty catch and spin before darting into the endzone for his first score of the day.

The Vikings answered that score but so did Jones, getting touchdown No. 2 right before the end of the quarter.

The Vikings led 21-14 with seconds left in the first half but Stafford found Jones for his hat trick just before the close expired, tying things up as both teams headed into the locker room.

Marvin Jones having himself a DAY.

Finally, Jones capped his humongous day with a fourth touchdown on a beautiful quick pass from Stafford late in the fourth quarter.

Marvin Jones is the first #Lions WR to have 4 TD catches in a game since 1950. #OnePride

This was the second time in his career that Jones has caught four touchdowns. That puts him in very rare company that includes Jerry Rice and Sherling Sharpe as the only other players to do that in the Super Bowl era. He’s also the first Lion to catch four touchdowns in a game since 1950 (Jones was with the Bengals for the first 4-TD game). Not too shabby.

While Jones’ performance did bring the Lions within striking distance, it was ultimately not enough to top the Vikings, who won 42-30. Still, that’s a banner day for the wide receiver and anyone who was smart enough to start him in FF. Alas, there were certainly plenty of fantasy owners who didn’t see this coming…

That moment when you started David Johnson and Kenny Golladay… while watching Marvin Jones and Chase Edmonds going off pic.twitter.com/3lBj0ZDXsD

Me after watching Marvin Jones Jr going off on my bench in fantasy pic.twitter.com/72LlriSW3t

My last minute decision to bench Marvin Jones Jr has led me to the conclusion the Fantasy Football sucks and I hate it #DETvsGB pic.twitter.com/0Ur1QkqTgj

Congrats to Marvin Jones and those wise enough (or lucky enough) to have seen this coming.