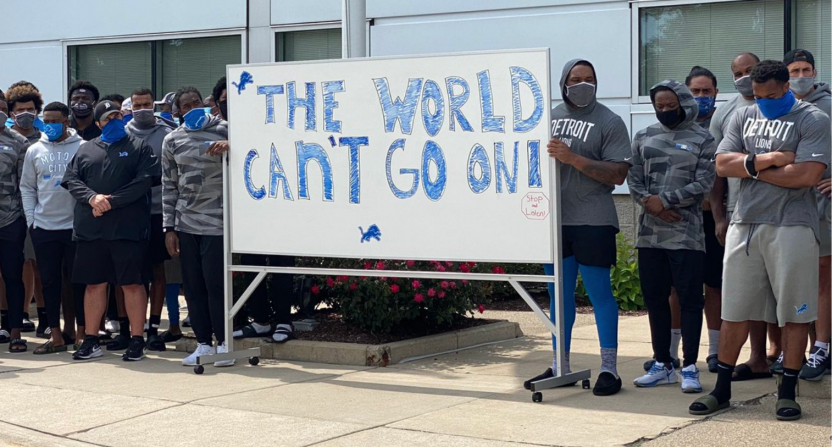 The Detroit Lions canceled practice at their Allen Park, Michigan headquarters on Tuesday afternoon. But the players didn’t put football on hold for fatigue or safety concerns. This was about social justice and they had something to say.

Word circulated among the reporters covering the Lions around 1 p.m. ET that practice was canceled and it quickly became apparent that this wasn’t related to COVID-19, safety concerns, or something football-related.

Minutes later, as the team (including head coach Matt Patricia) gathered outside the team complex, it was clear that this was regarding the police shooting of Jacob Blake in Kenosha, Wisconsin on Sunday.

This is why Lions practice was canceled today. Entire Lions team addressing media outside the building to discuss the shooting of Jacob Blake.

According to witnesses and reports, Blake, 29, was attempting to break up an argument between two women when police arrived on the scene. As he was entering his SUV with his three sons (ages 3, 5, and 8) waiting inside, an officer fired his gun seven times into the unarmed Blake’s back at point-blank range. The incident happened during daylight and was recorded on cellphone video, which quickly spread online.

The shooting and the civil unrest which followed in Kenosha — along with protests in other cities like Seattle, New York, and Minneapolis — throughout Monday night left football far from the topics of discussion when the Lions reported for practice Tuesday morning. As reported by the Detroit Free Press‘ Dave Birkett, practice kept getting pushed back as players voiced their outrage and concerns during team meetings.

Duron Harmon was among the players who addressed the media gathered outside the team complex, followed by Trey Flowers and Taylor Decker.

The Detroit Lions organization is going to take a stand that what happened to Jacob Blake is “Not okay.” Duron Harmon first addressing assembled media. pic.twitter.com/xOqFDFNY0V

Trey Flowers: "We have brothers, we have fathers, we have sons, nephews … they're not in camp. They have to go deal with real world situations. … We'll play football, but we'll also change the world with our platform."

Lions' Taylor Decker emotional as he talked about hearing stories from black teammates about their daily concerns, and why shooting in Kenosha struck them so powerfully, as other police incidents have. In aftermath of another horrible case, it sure looks like this team bonded.

Blake’s shooting touched off protests, demonstrations, and unrest in Kenosha Monday and into early Tuesday morning. Police used teargas and fired small beanbags at those causing damage to storefronts and street signs. Local businesses and residences were destroyed by fires and looting, leading to the National Guard being called into the area.

Meanwhile, Blake’s father says his son is currently paralyzed from the waist down, hospitalized in stable condition, due to the shooting.

“We had our team meeting this morning and no football was talked about,” quarterback Matthew Stafford told reporters (via the Free Press). “Coach just opened the floor. The conversations lasted four hours and it was incredible to be a part of it.”

#Lions coach Matt Patricia on not practicing today after talks with players on the Jacob Blake shooting: "I challenge everybody in the league to go out there and to continue these conversations and to listen. These are real stories. … We want to be a part of the solution."

There will be plenty of fans who will criticize the Lions players (and other professional athletes such as LeBron James, who spoke out against the Blake shooting after the Los Angeles Lakers’ playoff game Monday night) for this.

But as the outrage and protests following the George Floyd murder in June made clear, so many people don’t want to be quiet about this. They want change to occur. They want systemic racism to end. They want police brutality against Black people to stop.

"We are scared as Black people in America. … Black men, Black women, Black kids. We are terrified."

LeBron shared a powerful message on Jacob Blake and what it's like to be African American in America. pic.twitter.com/UOMD7rk7Bd

With a prominent platform, athletes and celebrities want to use their heightened profile to raise awareness of these issues. It was important for NBA players before agreeing to restart their season in Orlando. Baseball players wanted to make sure that social justice messages were a part of MLB’s opening weekend, as well.

And though the Detroit Lions did this on their own, it shouldn’t be a surprise if more NFL teams follow their lead and use their collective voice in the days and weeks to come as the season approaches.

We can’t become numb to it… The world can’t just go on… All lives don’t matter UNTIL Black lives matter .. Love this team ✊🏾 @Lions https://t.co/VsuBUvdzaX