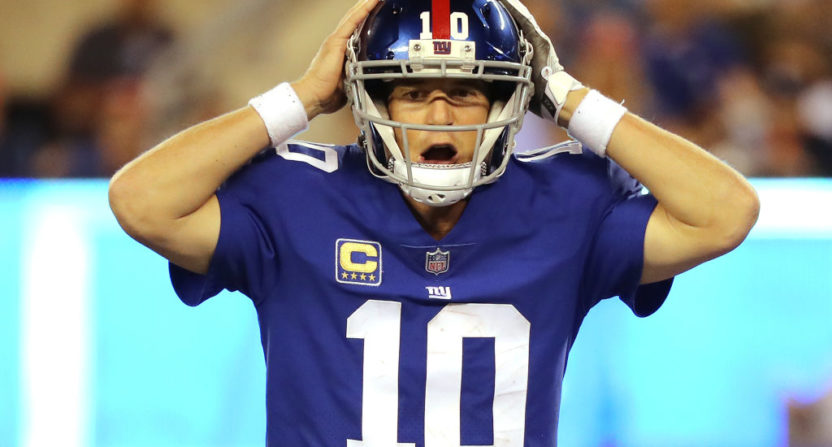 The answer to our headline question is probably no, the NFL does not have a quarterback problem. It’s been just two weeks and we’ve developed a habit of asking these and similar questions prematurely.

That being said, the quarterback play has been so top-heavy/bottom-light early this NFL season that it’s still worth breaking down the numbers and hypothesizing about what’s happening with a large chunk of the league’s signal-callers.

A total of 35 quarterbacks have started at least one game this season. Among that group, here’s a list of quarterbacks who have by my admittedly subjective standards performed well in each of the first two weeks of the 2017 regular season.

1. Alex Smith of the Kansas City Chiefs
2. Derek Carr of the Oakland Raiders
3. Matt Ryan of the Atlanta Falcons
4. Matthew Stafford of the Detroit Lions
5. Trevor Siemian of the Denver Broncos
6. Drew Brees of the New Orleans Saints
7. Ben Roethlisberger of the Pittsburgh Steelers

Sam Bradford knows where his bread is buttered…@stefondiggs will be fine outside ???? pic.twitter.com/r8jgIsJcaK

Also belonging in the “good” category are three quarterbacks who have performed well, but have started just one game.

1. Sam Bradford of the Minnesota Vikings
2. Jay Cutler of the Miami Dolphins
3. Jameis Winston of the Tampa Bay Buccaneers

Then there are the starting quarterbacks who have been good-not-great, or have had uneven starts to the year.

That gives us exactly 16 current starters, meaning the other 16 (plus three — Case Keenum, Scott Tolzien and Tom Savage — who have either already lost starting jobs or have only started as injury replacements) have stunk.

A breakdown of the 16 who matter…

1. Russell Wilson of the Seattle Seahawks: He ranks in the bottom five in terms of completion percentage (56.1) and yards per attempt (5.4).

2. Joe Flacco of the Baltimore Ravens: The 32-year-old is averaging just 6.6 yards per attempt and has been more of a liability than an asset during Baltimore’s 2-0 start.

3. Cam Newton of the Carolina Panthers: Carolina is also 2-0 in spite of its quarterback. The 2015 MVP has been embarrassingly inaccurate thus far.

4. Marcus Mariota of the Tennessee Titans: It’s utterly disappointing that the supposedly rising third-year Oregon product has completed fewer than 59 percent of his passes while posting a 78.7 passer rating.

5. Eli Manning of the New York Giants: One touchdown pass, two interceptions and an 83.0 passer rating for the 14-year veteran. The Giants offense has failed to score 20 points in a remarkable eight consecutive games.

6. Tyrod Taylor of the Buffalo Bills: He put up garbage numbers against the garbage Jets in Week 1 and didn’t even show up in a Week 2 loss to the Panthers.

#Redskins Kirk Cousins comes up in the clutch, with the 11-yard TD strike to Ryan Grant to secure the Win. ?#Rams lose 27-20. pic.twitter.com/G1WPrCkStx

7. Kirk Cousins of the Washington Redskins: Mr. Franchise Tag crapped the bed at home against the division-rival Eagles in Week 1 and was mediocre for the majority of the team’s Week 2 matchup with the Rams. He has more turnovers (three) than touchdown passes (two).

8. Mike Glennon of the Chicago Bears: Two touchdowns, three turnovers and a 81.2 passer rating for the winless Bears.

9. Carson Palmer of the Arizona Cardinals: Two touchdowns to four picks and a 54.8 completion percentage. And it’s important to remember Palmer has put together just one good season in the last decade.

10. DeShone Kizer of the Cleveland Browns: Gets a pass for being a relatively raw rookie, but he still had just one touchdown pass to four interceptions.

11. Deshaun Watson of the Houston Texans: Just as early for him, but the numbers have been just as atrocious.

12. Andy Dalton of the Cincinnati Bengals: The league’s lowest-rated passer has zero touchdowns and five turnovers in two losses.

13. Blake Bortles of the Jacksonville Jaguars: Two touchdowns, three turnovers, a completion percentage of just 56.4 and a passer rating of just 72.4.

14. Brian Hoyer of the San Francisco 49ers: Despite a promising preseason in new head coach Kyle Shanahan’s quarterback-friendly offense, the veteran ranks dead last in the NFC with a 60.7 passer rating through two ugly losses.

15. Josh McCown of the New York Jets: Nobody expected much and that’s what he’s given us with a 78.5 passer rating through two losses.

We’ve been spoiled in recent years, even by rookies (Andrew Luck, Robert Griffin III, Russell Wilson, Marcus Mariota, Jameis Winston, Dak Prescott), and this year’s rookie class wasn’t expected to dazzle. So that’s a factor. You also have to consider injuries (Luck and Ryan Tannehill, plus Flacco and Newton in the preseason) and abnormally bad play from offensive lines (at least a partial excuse for Wilson, Palmer, Watson, Savage, Dalton, Manning, Tolzien and Brissett).

League-wide, touchdown-to-interception ratios have declined, and I’m not sure those broad numbers will recover. It’s not as though we’re starving for signal callers like never before, but more than half of the league’s quarterbacks have struggled. If anything, the first two weeks of the 2017 regular season have served as a reminder that this arguably-way-too-large league has 32 teams and fewer than 32 franchise-caliber passers.