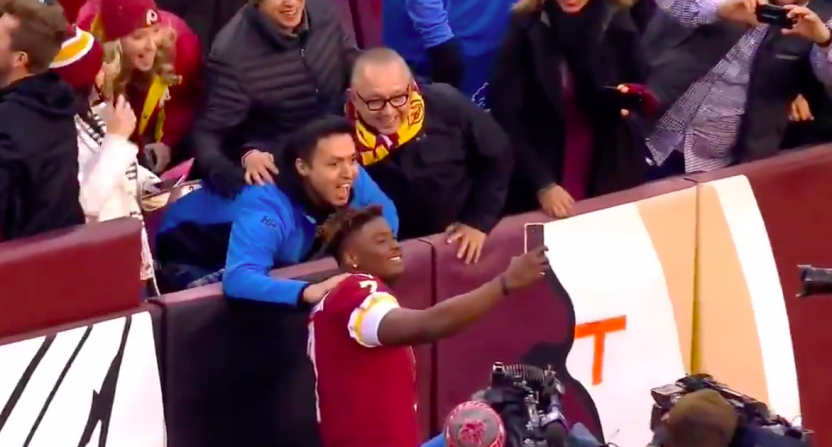 It hasn’t been a particularly fun first NFL season for Washington QB Dwayne Haskins so far. The 15th-overall pick in the 2019 NFL Draft had played in four games coming into Sunday, having thrown only two touchdowns to five interceptions. All four games, including two starts, have been losing efforts.

Haskins made his second career home start on Sunday and he finally bucked the trend and gave Washington a sliver of hope for the future of their franchise. The next step, however, is making sure you finish the entire game.

It wasn’t a particularly clean effort from Haskins and Washington, but they found a way to win. With the score tied 16-16, Washinton’s Quinton Dunbar intercepted Lions’ quarterback Jeff Driskel with a minute left. Haskins drove the team into field goal range and Dustin Hopkins hit the game-winning field goal from 39 yards out with 16 seconds left. It was Washington’s second win of the year and ends a four-game losing streak. Haskins finished 13 of 29 for 156 yards and an interception.

Dwayne Haskins in the clutch! #HTTRpic.twitter.com/Yz60okvAOw

It goes without saying that Haskins was excited about the big win.

Dwayne Haskins gets his first win in the NFL, and the emotion starts to set in on the sideline with OC Kevin O'Connell.

Don't ever tell me that @dh_simba7 doesn't care.

This dude is about it. pic.twitter.com/tiqFapPBFj

Good for Haskins for getting that first win in the books. One note, however. Washington had gotten the ball back with a couple of seconds left on the clock and the offense needed to go out onto the field to put down a knee and officially end the game. Haskins, however, was nowhere to be found. Backup Case Keenum took to the field to take the knee. Meanwhile, Haskins was already over on the sidelines taking selfies with fans.

Dwayne Haskins takes a selfie with fans while Case Keenum has to do the victory formation pic.twitter.com/Y76AL2cquF

We’re not gonna pile on that much as Haskins is clearly excited about the win, the fans, and everything good about football. There are far greater crimes than getting so excited that you forget about the last play of a game you’ve already won. Just, you know, next time, keep an eye on the clock, Dwayne.