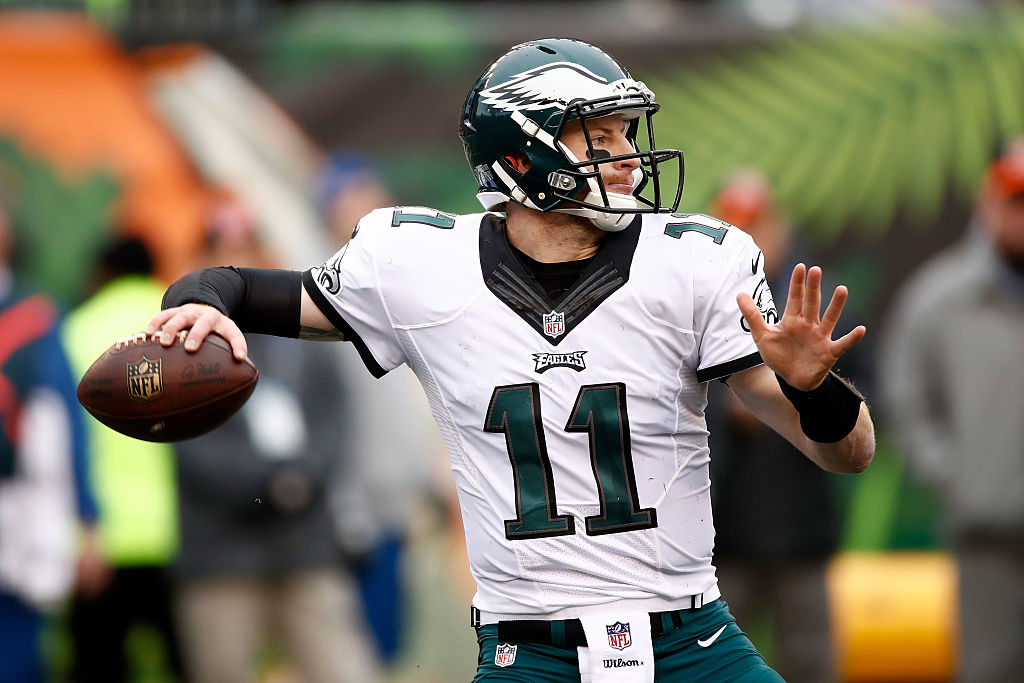 It goes without saying that some rookie quarterbacks need ot go through some adjustments before they reach their full potential in the league. The Philadelphia Eagles drafted Carson Wentz out of North Dakota State with the second overall pick in the NFL Draft this past spring with the expectation he would bring all of the tools needed to be a successful franchise quarterback, but as the 2016 season has played out it appears there may be more reasons to be concerned about Wentz’s skill than initially perceived.

The red flags have been going up more and more often in recent weeks as the woeful Eagles continue to stumble. The latest setback was  a humiliating 32-14 loss on the road against the Cincinnati Bengals on Sunday, in which Wentz was picked off three times. After a solid start to his NFL career, Wentz appears to be regressing already, with some NFL eyes suggesting there may be something wrong with his mechanics.

When Carson Wentz goes into his throwing motion the ball has been BELOW his elbow as he winds up – leading to high throws per ESPN Analysts pic.twitter.com/74w03YLzA9

“I don’t think it’s the mechanics,” Wentz said after Sunday’s loss, according to Yahoo Sports. “You make mistakes. Things happen.”

Some scouts referenced by Yahoo would beg to differ.

One NFC East source likened Wentz’s arm positioning to something from a baseball pitcher. Another evaluator said the rookie displayed “bountiful bad arm angles” during his throwing motion.

“[The] ball is dropped down, turned out, then looped back around,” one evaluator said. “With his long arms and that motion, [it’s] very hard to be accurate. Especially on the move. … [The] inability to get the ball out quick and on time is key.”

Right from the jump, those covering the Eagles made sure to capture every possible second of Wentz in action, even during spring camp. His throwing motion was a big draw. That is because the Eagles knew going in his throwing motion would need to be addressed, but it was something the team felt could be corrected.

This is not uncommon of quarterbacks coming out of the college game and into the NFL. It happens with many quarterbacks who played a different system or played the game so well without having to address mechanics that it was rarely an issue in college (or high school). Wentz was able to get by with his throwing motion at the FCS level with a dominant North Dakota State program, but if he is going to reach his full potential he may have to address his mechanics (the Eagles front office helping him out with some adequate running backs and receivers would help too).

Here's Carson Wentz throwing in slow motion, because why not? pic.twitter.com/b2emRBLv59

The good news is Wentz is still just a rookie and he has shown nothing but a great attitude toward wanting to improve his play even when things seem to be trending in the opposite direction right now. Wentz is not the biggest concern for the Eagles in the long term, because he will work to do whatever he needs in order to help the team win.

It is also worth mentioning the Eagles had a master plan to basically sit Wentz for the entirety, if not the majority, of the 2016 season while Sam Bradford took on the starting job and Chase Daniel served as the primary backup option. Those plans changed in a hurry when the Minnesota Vikings lost Teddy Bridgewater for the season to a season-ending injury and the Eagles cashed in on an opportunity to pick up a draft pick and give Wentz playing experience right away.

The bigger problem may be from hiring a guy in Doug Pederson and offensive assistant Frank Reich who are supposed to be helping Wentz improve as the weeks go by. Maybe Wentz isn’t the problem. Maybe it’s the coaches. Franchises can afford to allow draft picks to develop, but the same leniency should not be afforded to coaches.