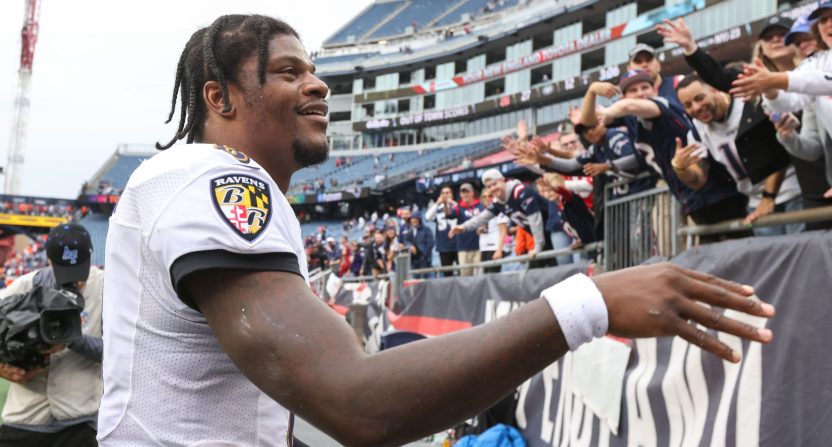 One of the biggest topics this offseason was the contract negotiations between the Baltimore Ravens and star quarterback Lamar Jackson.

Ravens general manager Eric Decosta revealed ahead of the team’s season-opening game that the two sides were “unable to reach a contract extension” and that further negotiations would likely be pushed back to the end of the season.

Despite the uncertainty that surrounds Jackson’s tenure with the Ravens, he has been excellent on the field for the organization.

The former MVP quarterback has already thrown for 10 touchdowns with only two interceptions on the year. He has also rushed for 243 yards on the season with two rushing touchdowns.

These numbers are on pace to far exceed his injury-riddled season last year.

Despite this, former Ravens legend Ed Reed seems to be a bit concerned for the star quarterback with his looming contract situation hanging in the balance.

Reed discussed Jackson’s contract negotiations with Kevin Clark of The Ringer, where he revealed that he thinks Jackson should be careful with how he plays moving forward.

“Now that I’m on the analyst side of things, he’s just got to be smart,” Reed said. “I’m not telling him to play scared or anything because I don’t think he’s gonna do that, he hasn’t displayed that, but he has to be smart because it is a business and they will use that sh*t against you whether you like it or not.

“You can think these people love you. They’re showing their true colors right now. And it’s no shot at the Ravens because they are an organization that’s a business. It’s a business first. It’s the NFL and it’s football to the players and we love that, but it’s a business first to the league.”

SND: I asked Ed Reed about Lamar Jackson's contract and got a thoughtful answer about playing styles, what teams hold against you and how *he* changed in the last year of his rookie deal. Strong words.
Ep up shortly
Spotify: https://t.co/ZzsN2boRIw
Apple: https://t.co/R5dN0ajhMB pic.twitter.com/TJ2Zyh7CV6

Reed added that Jackson needs to avoid getting hurt because that will likely directly affect how much money he will be offered by Baltimore in the coming offseason.

“They ain’t gonna pay you as much,” Reed said if Lamar Jackson were to get hurt. “He didn’t finish the season last year, it’s a business, man.”

To this point, Lamar has not seemed super concerned about his health and has done everything possible to propel the Ravens to victory week in and week out.