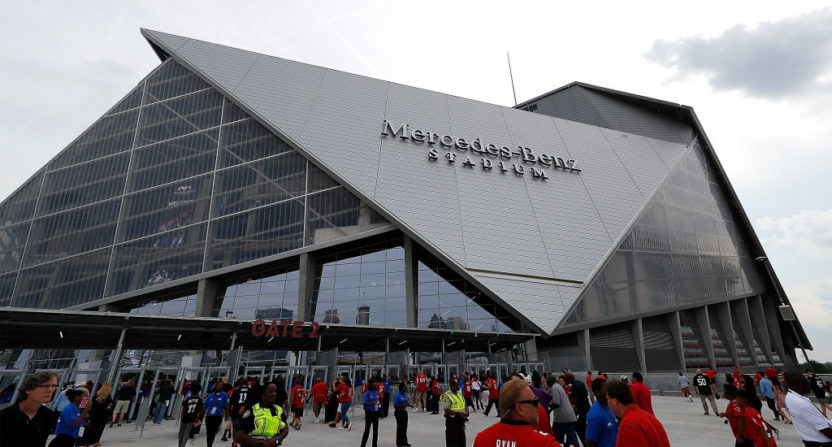 Mercedes-Benz Stadium in Atlanta just opened this month and it is a technological marvel. It better be if it cost $1.6 billion. From the retractable roof, to the circular LED board, to the sideline suites and more, the designers of Mercedes-Benz Stadium thought of everything and it really looks nice on TV. Problem is, they may have made it extremely tough to exit the stadium.

Multiple people reported that they weren’t able to get out of the stadium after Saturday night’s Alabama-Florida State and Monday night’s Tennessee-Georgia Tech game. Their stories range from simple frustration to being downright terrifying.

@MBStadium Anyone else have an issue w/trying to get out? #nightmare design. #mercedesbenzStadium fix ! #danger Should have used Ramps pic.twitter.com/OErsCIJA1C

#mercedesbenzstadium was nice but the engineer that designed the exits needs more practice…..#badcrowdflow ?

It's scary bad getting out and they weren't letting anyone use the escalators. pic.twitter.com/wBhAq4xo0O

Please let us out of #mercedesbenzstadium! Not enough doors! Exits! #FOUTR

Y'all I can't even get out of this stadium. Every time we try we get turned around.

They're forcing opposing fans to bunch together. This is how you get fights

They're asking for a crush accident. And multiple fights.

They have to get that shit sorted because game result aside, that's fucking dangerous

We are now outside the stadium and stuck at the gate?

They aren't letting us leave. People are jumping over a wall.

My 65 year old father just had to jump a wall

Update. There's another wall to jump

Yeah I was there too. Awful. How are there not more exits?!

There were walls, they blocked us

We saw beginnings of this issue when we tried to get beer. The 300 level is too narrow for that many people

You want to have more than one exit @MBStadium ?

The exit plan was horrible. Took 33 minutes between leaving seat to get outside. Staff was directing traffic, but always to another door.

Well, let's hope there's not an emergency because if there is we are pretty screwed because that was bad

Yeah it was horrible, dont understand how you could not have more than 3 gates eith people squeezing down narrow stairs

Having a sport management degree with a concentration in stadium operations/event management and being an operations intern for a team who took part in the opening of a new stadium, I have some experience in this and might be able to help figure out what’s going on. For one thing, there are laws in place that a stadium must have a minimum number of certain things based on its capacity. You have to have a seat for every person (unless you have an approved standing room section), you have to have so many restrooms (FYI: there needs to be more women’s restrooms than men’s) and you have to have so many exits to prevent a potentially dangerous scenario like a crush from happening.

So I have to imagine that for the state of Georgia to approve this stadium design before they built Mercedes-Benz Stadium, they made sure there were enough exits to adequately allow 71,000 people to leave without anyone having the feeling of being trapped.

Having said that, the issue may very well be that while there are enough exits, they aren’t in the best places or they are very difficult to get to which causes bottlenecks before you can even get to the exit. And when a large group of people are trapped in a space barely able to get out and more and more people are coming in from behind who are unaware the people ahead of them are stuck, that’s a recipe of a potential crush and that’s kind of what resulted in 96 Liverpool fans dying and hundreds of fans being injured at Hillsborough in 1989.

You also had many people who were able to leave Mercedes-Benz Stadium without any trouble and some seemed to have trouble understanding what the issue was because they personally were able to get out. They might have been able to get out without trouble and I imagine that could be the case with 99% of the people there. But if 1% of those there had trouble getting out of the stadium to the point it could cause catastrophic problems down the road, that’s still a serious issue that needs to be rectified ASAP. 1% of 71,000 is still 710 people and if anyone gets injured, or killed because of a faulty design in how people get out, that’s still a tragedy that seems like it could be preventable.

Even if the people who tweeted about what happened blew things out of proportion, it’s important for Mercedes-Benz Stadium and the Atlanta Falcons to be proactive in figuring out what happened and if they need to make changes, make them as soon as they can. You can never ignore safety concerns. Many safety improvements unfortunately come as a result of tragedy so when someone speaks up about safety, no matter how big or small the concern, it should be dealt with before a tragedy does happen. Because if they ignore any safety concern and that results in someone dying, it won’t matter how cheap the food is at Mercedes-Benz Stadium.