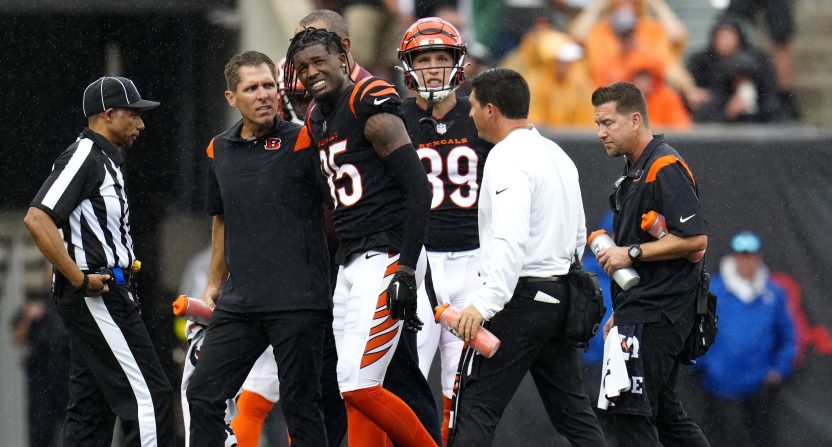 Fantasy football is fun because while you can spend hours studying and finding the perfect player for your team, plenty of factors beyond your control will create just enough randomness that anyone could win on any given week.

Twitter user Dylan Jackson looked like he had a great lineup before the Week 1 games, but the fantasy football gods can punish you in ways you can’t imagine. Among his nine starters, four picked up in-game injuries that kept them out for the rest of the game, and the other five put in poor performances. Maybe except for kicker Dustin Hopkins, who wound up with the second best point total on the team.

I have no words pic.twitter.com/9BwQmZEz87

At halftime of the Buccaneers–Cowboys game, Dylan had 36.5 points out of a projected 121.3. Dak Prescott picked up a few more points but it was certainly a rough week and will probably be a rough season given all the injuries.

Tee Higgins and Najee Harris were both injured in the Bengals–Steelers game. Elijah Mitchell was injured in the first half of the 49ers–Bears game. It went from bad to worse Sunday night as Prescott had a rough game that was punctuated with injuring his thumb toward the end of the game. All four injuries have potential to be multi-week injuries with Prescott going on IR so he can get thumb surgery.

Even in the fantasy version we can break out the football clichés. It’s just Week 1, it’s still a long season, and just have to take it one week at a time. Maybe things can be salvaged and if Dylan can scrape into the playoffs, it’s possible his season can be turned around. But it’s going to be a difficult next few weeks.