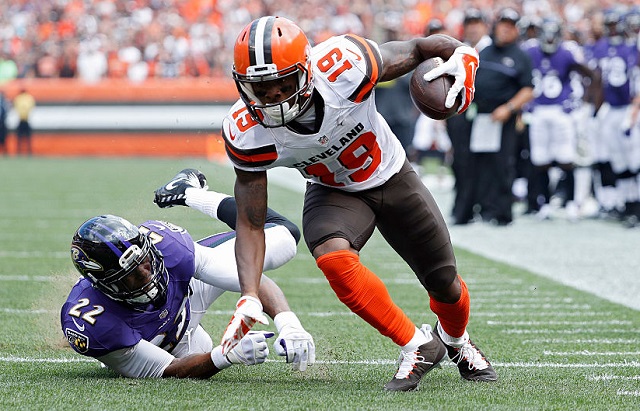 Week 9 of the NFL season is the second of two weeks where bye weeks play a massive role in the fantasy football landscape. Six teams absent from the player pool will make for yet another Sunday where emergency replacements will be needed and sleepers will play a big role.

Bye weeks for Washington, the New England Patriots, Arizona Cardinals, Houston Texans, Cincinnati Bengals and Chicago Bears will yet again bring the need for smart waiver wire moves for fantasy owners this week. If you need a replacement for Rob Gronkowski, Lamar Miller, A.J. Green, or any of the other big names who are on the sidelines for the bye week, you will need to consider these five fantasy sleepers to salvage what could otherwise be a brutal week for fantasy owners who face a tricky Week 9 bye week frenzy.

The Detroit Lions offense has been solid for fantasy owners all season, thanks to the play of quarterback Matthew Stafford, and Eric Ebron is one of the players who has benefited from their high-powered attack. The athletic tight end has returned from a three-game absence and has instantly became one of Stafford’s top targets once again in the passing game.

Ebron had season highs in both targets (10) and catches (seven) against the Texans last week, numbers that should continue even with another tough defensive matchup this week against the Minnesota Vikings. The Lions love to throw around the football this season, which has made all of the targets on the roster viable fantasy football options. Ebron has to compete for targets with top wideouts Marvin Jones Jr. and Golden Tate, but it looks like the tight end is enough of a focal point in the Lions attack to be one of the better fantasy options in the league when healthy. If Ebron is still available on the waiver wire, make sure to add him for the final push in your fantasy league regular season.

Another target who has value after recently returning from an injury, receiver Donte Moncrief’s fantasy value this week is increased by the possibility of a banged up T.Y. Hilton for the Colts’ game against the Green Bay Packers at Lambeau Field. Hilton’s hamstring injury suffered last Sunday against the Kansas City Chiefs could set the stage for a big game from one of the Colts’ secondary targets, particularly Moncrief after the talented wideout made his return from a five-game absence.

Donte Moncrief has scored 7 TDs in 10 games with Luck since the beginning of last year.

Moncrief jumped right back into the mix for the Colts last Sunday with a touchdown and four catches off nine targets. That was enough to get the wideout into double digits in fantasy scoring for just the second time this season. Moncrief could be available in the right league off the waiver wire and is a must-start player with the chance of an uptick in targets this week. Even when Hilton is 100 percent, Moncrief will still be a solid fantasy option as a secondary target in the Colts offense, but this week sticks out as a potential breakout game for the wideout if the team relegates Hilton to a decoy role with his current injury status.

While Moncrief and Ebron both made successful injury returns last week, Corey Coleman makes this list before coming back this Sunday against the Dallas Cowboys. The talented rookie is set to be a solid late-season fantasy add after six games on the sidelines with a broken hand, which forced many owners to place Coleman on waivers.

Owned in just 43 percent of Yahoo fantasy leagues as of Friday morning, Coleman’s last game before his injury stint was a monster two-touchdown, 104-yard performance against the Baltimore Ravens. With Josh McCown in at quarterback, Coleman could once again become a top target for a Browns team that should throw the football at a high rate while chasing most games from behind in the second half this season.

If the Browns continue to air it out late in games as they look for their first win of the season, Coleman could finish the year strong with big numbers, returning to the ranks of top rookies this season after his long injury layoff. At this point of the season with scarce options for top players on the waiver wire, owners should add Coleman without hesitation if he is available this week after his long stint on the inactive list.

This is a risky option for those who have to deal with a quick bye week replacement for their usual starting quarterback, but one that could play huge dividends due to a favorable matchup. Vikings quarterback Sam Bradford is set for what could be a big bounce-back game against the Detroit Lions and needs a strong performance to silence the growing critics after his team dropped back-to-back games with just 10 points scored on offense in both defeats.

Bradford was woeful in both losses, thanks to poor protection from his offensive line, but the Lions’ dreadful pass defense should give the Vikings passer more than enough of an opportunity to turn it around this week. Detroit has allowed the second-most passing yards in the league this season, and after Case Keenum had a strong fantasy performance against Detroit’s secondary, it is safe to assume that Bradford will have his best game of the season this week. If you are hard up for a quarterback this week with six teams on the bye, Bradford could be the best bet of the bunch off of the waiver wire.

Owned in just 10 percent of Yahoo leagues, Dolphins wideout Kenny Stills is one of the best deep sleepers on the board this week after he jumped in targets before Miami’s bye week. Stills tied his season-high for targets with eight in Week 7 for the Dolphins, five of which were catches as he finished with one touchdown and 100 yards in the team’s win over the Buffalo Bills.

Stills’ big game came at the perfect time as the Dolphins are likely to further incorporate the receiver into the game plan after his 100-yard day. If Miami focuses on getting Stills more targets, he could have a monster week against a New York Jets secondary that has been among the worst in the league this season. With just 10 percent ownership, Stills is a waiver wire gem that has value this week as a bye week replacement and beyond if he can become a bigger part of the Dolphins offense.