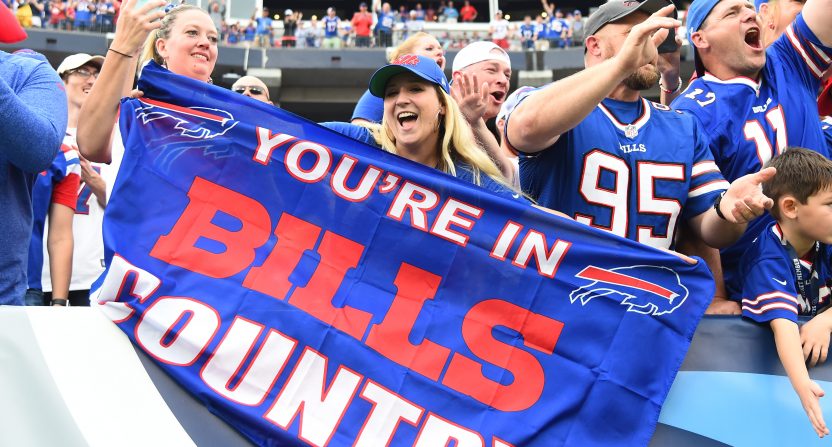 If you were a casual fan tuning in to watch NFL games this Sunday and didn’t know where the games were being played, no one would have blamed you at first glance for thinking the road game was actually the home team. Apparently, teams have figured out how to fight back against poor attendance and the answer is…let the opposing fanbase take over your stadium.

We start in Los Angeles. Well, just outside of Los Angeles to be honest. The Chargers have had a tough time trying to fill their temporary soccer stadium home in Carson while they wait to take up tenancy in SoFi Stadium in Inglewood. Between pissing off their traditional fanbase in San Diego and being completely unintegrated with LA, the team has struggled to put local butts in seats. The solution appears to be to play teams with fanbases relatively nearby as much as possible. Case in point, all of the Denver Broncos fans who took over Dignity Health Sports Park today.

4:58 to play in the 1st quarter. #Broncos just scored on a 79-yard TD pass time Courtland Sutton to make it 14-0. More seats filled but they seem to be orange. #DENvsLAC pic.twitter.com/mSSpKNJALJ

The “home-field advantage” for the Broncos was so clear that even the announcers mentioned it.

Meanwhile, in Washington, D.C., there isn’t a lot of hope for the NFL’s Washington franchise. They’re 0-5, don’t seem to have any idea what they’re doing on offense, and the mighty New England Patriots have come to town. While that sounds like terrible news for Washington fans, it appears to have brought out plenty of Patriots faithful looking to enjoy an easy win and a nice weekend in the nation’s capital.

The walk from the Metro to FedEx Field, home of the Washington Redskins. pic.twitter.com/nQJfjTyz8t

Brady takes the field. So. Many. Patriots. Fans. pic.twitter.com/Klykzjd8wl

So many Patriots fans in Washington today. pic.twitter.com/7j7oJnEiAM

Speaking of AFC East fanbases taking over other stadiums, we turn our attention to Nashville where the Tennessee Titans were hosting the Buffalo Bills on Sunday. They were also hosting a whole bunch of Bills fans and, if we know anything about Bills Mafia, it’s that they intended to injure themselves jumping onto risky structures in the parking lot and taking over Nissan Stadium to support their 3-1 (now 4-1) team.

Now that I’ve been in Nashville for like an hour, here’s the count

Step it up Titans fans

The amount of Bills fans to get in is INSANE. pic.twitter.com/ImPdMvpLXW

And the Titans fans are now leaving the new Home of The Bills, Nissan Stadium! #gobills #BillsMafia pic.twitter.com/KxpJ9CEser

NFL fans traveling for their teams isn’t anything new, but it does feel a bit like certain fanbases are taking advantage of the woes of offer fanbases to build de facto home games wherever they go. It raises some interesting questions about how the league and franchises should be targeting their efforts when it comes to ticket sales and attendance. And if you are trying to build a true homefield advantage, you should just know that there are some fanbases who are actively going to prevent that from happening.

We suppose you won’t see anyone in the NFL complaining…except for the actual home team.