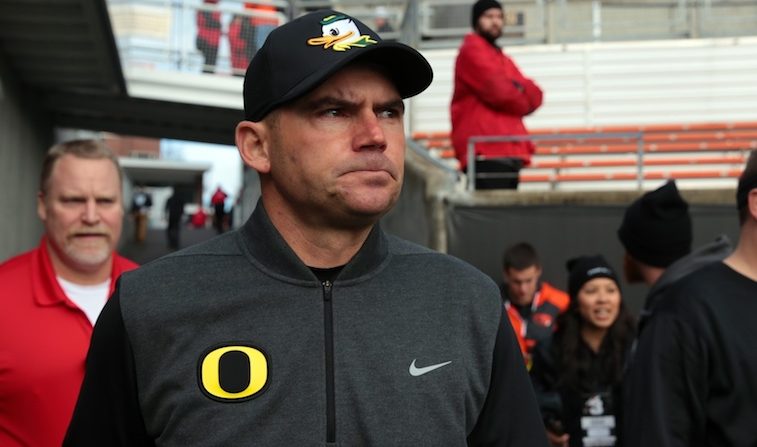 Former Oregon coach Mark Helfrich likely wasn’t going to stay in broadcasting too long. With the success he had during his eight seasons in Eugene (four as head coach), he wouldn’t go long without landing another job. Sure enough, after one season with Fox Sports, he’s returning to coaching.

Helfrich was hired Thursday as the offensive coordinator for the Chicago Bears for new head coach Matt Nagy. This will be his first time on an NFL staff. All of Helfrich’s previous coaching experience, beginning in 1996, has been at the college level.

Taking a hiatus from coaching, Helfrich joined Fox Sports last August as a game analyst, partnered with play-by-play man Justin Kutcher and fellow analyst Petros Papadakis. His first game in the booth was FS1’s Maryland-Texas broadcast on Sept. 2. As it turns out, Helfrich’s stint as a broadcaster lasted only one season.

Helfrich had been drawing positive reviews for his work in the booth, calling games each week. His crew had been assigned to some big games during the season, including the Pac-12 showdown between Washington (then ranked No. 9) and Stanford. During a podcast interview with Stewart Mandel and Bruce Feldman (both still with Fox Sports at the time), Helfrich admitted it was “awkward” to call a game in Corvallis, Oregon, which is where he coached his final game with the Ducks.

During his four seasons leading Oregon, Helfrich compiled a 37-16 record. In his second year, the Ducks won 13 games and went to the national championship game (losing to Ohio State, 42-20) in the first year of the College Football Playoff. But Oregon steadily declined during the next two seasons, bottoming out with a 4-8 campaign in 2016 that resulted in Helfrich’s dismissal.

There definitely have been talks. Sounds like Helfrich has to choose between #Bears OC and pursuing University of Arizona HC job. https://t.co/9QnetzgyiK

If Helfrich hadn’t decided to go to the NFL, it appears that he could have stayed in college. The University of Arizona was reportedly interested in hiring Helfrich to replace Rich Rodriguez. Or he could have reunited with Chip Kelly, for whom he was offensive coordinator at Oregon, and run the offense at UCLA. (Kelly had also taken a one-year broadcasting hiatus, working as a studio analyst for ESPN.)

Helfrich joined Kelly’s staff at Oregon in 2009 and was the offensive coordinator for four seasons before Kelly left Eugene for the Philadelphia Eagles. Succeeding Kelly as head coach (the third Ducks coach to be promoted from offensive coordinator), Helfrich transitioned from Kelly’s up-tempo spread offense to a more balanced attack. But the offense was still formidable, resulting in quarterback Marcus Mariota winning the 2014 Heisman Trophy.

So Helfrich won’t just be a spread offense guy bringing that system to Chicago. Obviously, Nagy will have his own philosophy, having been Andy Reid’s offensive coordinator for the past two seasons in Kansas City. He said at his introductory press conference that he plans to call plays, which would be the same scenario Helfrich worked under on Kelly’s staff.

Presumably, Helfrich’s responsibility will largely be developing quarterback Mitchell Trubisky, who will go into his second season as the Bears’ starter. His speciality has been working with quarterbacks during his career, having coached the position at Boise State, Arizona State (under current Tampa Bay Buccaneers coach Dirk Koetter), Colorado and Oregon.