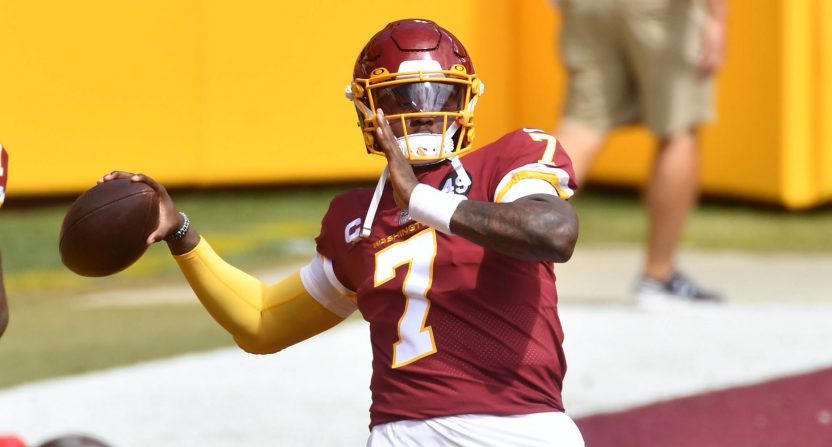 The 2020 NFL regular season might be only 6.3 percent complete, but teams are already swinging in and out of contention. Yeah, we love to overreact based on one week, but what else have we got to do? Let’s look at a quartet of teams that — for now — have become Super Bowl contenders.

But Brad, weren’t they always a Super Bowl contender? After all, they’ve played in like 17 Super Bowls in the last 16 seasons or whatever! Nooooo, they were not. Cam Newton had to prove that his body could hold up for an entire afternoon or professional football, Bill Belichick had to prove that his genius couldn’t only be activated by Tom Brady’s handsome presence, and the defense had to prove it was still elite without Jamie Collins Sr. and Kyle Van Noy.

Beating the lowly Miami Dolphins doesn’t totally accomplish that, but an easy victory over a team that has always been a thorn in New England’s side at least brings the Pats back into the Super Bowl conversation. Remember, this team went 4-5 down the stretch last season, but the AFC East could still be theirs in 2020.

Then again, it’s more likely to belong to Buffalo if quarterback Josh Allen truly has turned a corner in his third season. The 2018 top-10 pick had arguably the best game of his career despite two early fumbles against a putrid New York Jets squad Sunday.

The Bills have a far better all-around team than New England, especially with Stefon Diggs joining the fray at wide receiver. But they don’t have Belichick and Allen isn’t as accomplished as Newton. Sunday’s 33-for-46, 312-yard, zero-interception performance from the athletically awesome signal-caller moves the Bills into the Super Bowl conversation early.

There’s something about the nameless Washingtons. The WFT made all of us scream WTF when they outscored a high-quality divisional opponent 27-0 after falling behind 17-0 Sunday. They’re coming off an insanely tumultuous offseason, but they seem so focused and determined, and head coach Ron Rivera won’t let them quit.

Quarterback Dwayne Haskins Jr. did just enough to indicate he could take off in his second season, while the stacked defensive front looked unstoppable in the win over the Philadelphia Eagles. This team has a shot now, especially with the rest of the NFC East all winless.

The preseason hype would have you believe the Cards were already Super Bowl contenders, but we had to make sure they could actually come together and deliver with what looks superb on paper. This was, after all, a five-win team in 2019.

But they fully looked the part in an impressive Week 1 victory over the San Francisco 49ers, which is a strong indication they’ll hang around all season long in that tough division. Kyler Murray and DeAndre Hopkins are going to be a lot of fun to watch under Kliff Kingsbury’s tutelage.