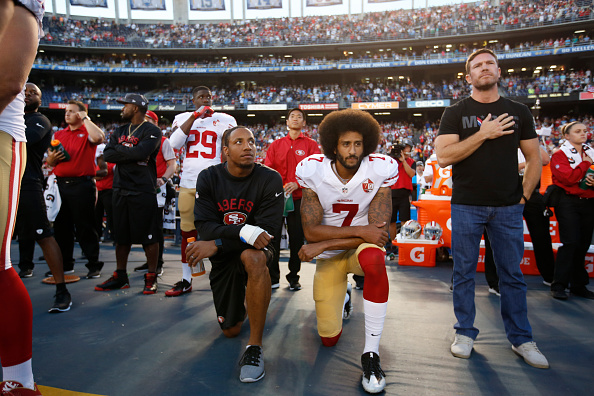 We’re all the way into late May and Colin Kaepernick still doesn’t have an NFL team. All offseason, the debate has raged on about whether or not Kaepernick is being blackballed by NFL franchises as other mediocre quarterbacks continued to be signed while he is not. In the meantime, even though he’s not on an NFL roster, Kaepernick has continued to work for social change like when he passed free out suits in New York City.

The Kaepernick saga has been filled with anonymous sources who are willing to come forward with why Kaepernick hasn’t been signed, but we’ve rarely heard from an owner or an executive elaborate about the Kaepernick situation on the record.

In an MMQB article about a rally for Kaepernick, Giants owner John Mara was one of the very few owners who have gone on the record in talking about Kaepernick so far being unsigned and went into more detail than many have been willing to thus far. Mara said the Giants haven’t discussed signing Kaepernick and likely never will because of the fan mail that his team has received about Kaepernick taking a knee last year.

“All my years being in the league, I never received more emotional mail from people than I did about that issue,” says Giants co-owner John Mara, who for 24 years has worked for the team his family founded. “If any of your players ever do that, we are never coming to another Giants game. It wasn’t one or two letters. It was a lot. It’s an emotional, emotional issue for a lot of people, moreso than any other issue I’ve run into.”

Mara said signing Kaepernick wasn’t discussed by his club this offseason, although the Giants never were a likely landing spot for him; they already have a franchise quarterback and were looking to find Eli Manning’s eventual successor in the draft. But the letters Mara received offer a league-wide glimpse into some of the unusual circumstances surrounding Kaepernick’s job search.

Yes, Kaepernick’s protest was very polarizing, but the backlash seems to be extreme, especially compared to what NFL teams have also dealt with. Especially the Giants. And especially John Mara.

It was just last August that Mara publicly defended his team re-signing kicker Josh Brown after detailed allegations of domestic violence in 2015. Just a few months later, Brown was released by the Giants after admitting that he had abused his wife. When speaking to the media before the season, though, Mara said he was “comfortable” with the team’s decision to re-sign Brown.

“All I can tell you is that we’re aware of all the allegations, and I believe all the facts and circumstances, and we were comfortable with our decision to re-sign him,” Mara said Wednesday. He followed by saying domestic violence is not a “black or white” issue, and that “you very rarely have a Ray Rice video”.

“I’m trying to be fair to him as well. I think he’s trying to do the right thing. He deserves an opportunity to show that he can do that.”

Where was the concern when the Giants re-signed Brown? Where were the angry letters? Where was any of the hesitance and hand-wringing and second thoughts about whether or not it was the right thing to do? Where was the worrying about a fan backlash for re-signing Brown?

So lemme get this straight….NY Giants were willing to go to bat for a kicker abusing his wife but Kaep would create an uproar ? pic.twitter.com/zNpcNRwKap

You may not agree with Kaepernick, you may have a strong distaste for the way in which he carried out his protest, but he didn’t hurt anybody and he didn’t commit a crime when he took a knee for the national anthem.

Maybe this is why owners and executives are so tight-lipped when it comes to why Kaepernick hasn’t been signed yet. Because when it can be compared to how owners and teams have given second chances to guys like Josh Brown, their reasoning and logic sounds terrible. How an NFL owner can be front and center defending re-signing Josh Brown and yet hide behind fan mail when talking about Colin Kaepernick is truly mystifying.