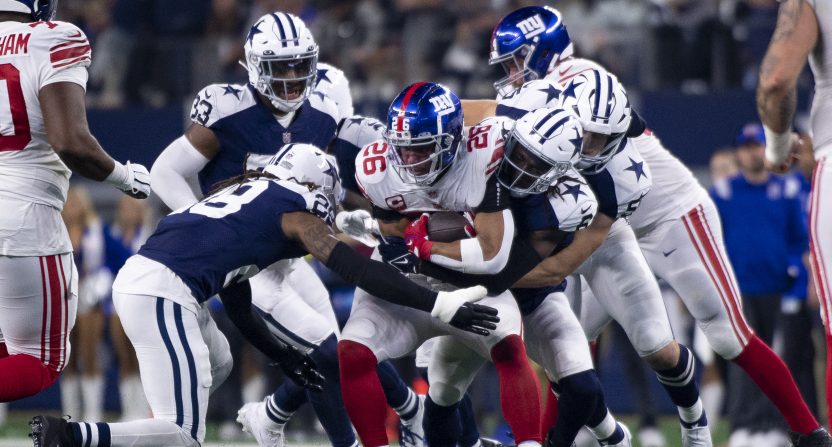 The New York Giants couldn’t get much going on offense Thursday against the Dallas Cowboys. A huge part of their struggles was the inability to run the ball with star running back Saquon Barkley.

Barkley was limited to just 39 yards on the ground in a loss to Dallas, and he took full accountability for his abnormally poor performance following the game.

He was asked why he thought the running game wasn’t as effective as it has been in past games this year, and he revealed that he feels that he needs to do “a better job”.

“I gotta do a better job,” said Barkley via SNY. “I’ll go back and watch film so I can give you a better answer. If the running game isn’t working, it starts with the running back.”

Saquon Barkley on why the Giants' running game hasn't been working as well recently:

"I gotta be better" pic.twitter.com/dH0zkv7KHt

Barkley only got 11 touches on the ground in the game, which is certainly surprising considering how talented of a running back he is.

He was also asked about his limited workload, which he said was a plan coming into the game.

“We thought that we could get the running game going later on, and we just didn’t get it going.”

It certainly can be argued that Giants head coach Brian Daboll could have gone to Saquon Barkley more while the team was leading in the first half.

They quickly fell behind in the second half, which obviously made them lean toward the passing game instead of using Barkley on the ground.

Regardless, it is a disappointing loss for the Giants, who had a possibility to move ahead of the Cowboys in the NFC East standings with a win.