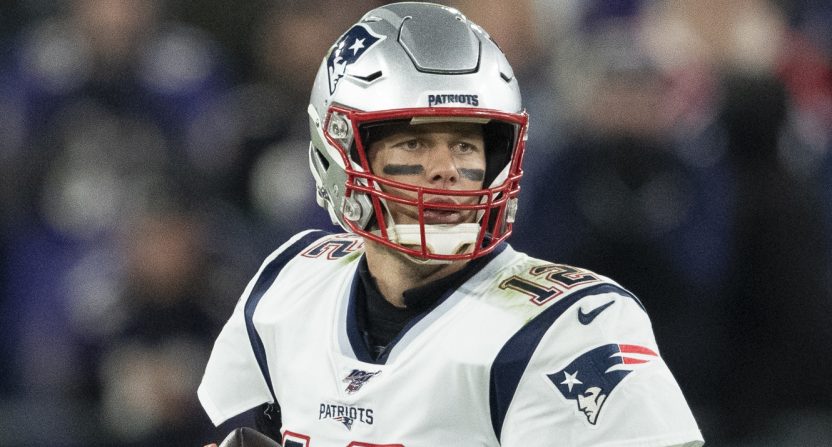 A dozen teams are currently on track to make the NFL playoffs, two more sit on the fringe at 6-4, and four more still have playoff hopes at 5-5. But nobody’s perfect. Here are the biggest flaws surrounding all 18 teams that are at or above .500 entering the home stretch (ahead of Thursday night’s Colts-Texans game):

Only a handful of players on the San Francisco roster have Super Bowl experience, and the coaching staff is pretty green as well. The 49ers won just four games last year, and they might not be ready for the spotlight in the tough NFC. Will they be a one-and-done surprise team like the 2017 Chicago Bears or 2018 Los Angeles Rams? Their schedule is hell, and I’m not sure I’d trust Jimmy Garoppolo against future Hall of Famers like Drew Brees, Aaron Rodgers and Russell Wilson down the stretch.

Seriously, Brady is showing some major signs of aging of late. The 42-year-old has really struggled when he’s had to face quality opponents, and his passer rating since Week 6 is just 82.0. The defense is stacked, but Brady isn’t particularly well-supported on offense. Do they have enough firepower on offense?

Again, seriously. Brees is 40. Last year, at 39, he threw only three touchdown passes to three interceptions for an 84.7 passer rating in his final four regular-season games and then struggled in the playoffs. He appeared to run out of gas, and now he’s a year older and coming off a somewhat significant injury. This is admittedly a nitpick, but the Saints are really friggin’ good.

Baltimore has more recent big-game experience than San Francisco because their coach has won a Super Bowl and they participated in a playoff game last year. Still, Lamar Jackson is still only 22 years old, and they’re relying on a lot of young parts on both sides of the ball after big offseason changes. That’s at least a minor concern for a team that is crushing it on offense and defense right now.

Only three teams have fewer sacks than the Seahawks, who haven’t gotten as much as expected out of newbies Jadeveon Clowney and Ezekiel Ansah. The former is coming off his strongest performance yet, though, so maybe we’ll soon be able to focus our criticism on Seattle’s forever-maligned offensive line instead.

The Packers offense has put it together after a slow start and there’s a lot of talent on the defensive edges, but the Packers have allowed 120 or more rushing yards in seven games this season. The pass rush has also come back to earth after a strong start, and they miss a lot of tackles.

The oft-maligned Minnesota offensive line has really gotten its act together, while quarterback Kirk Cousins has improved his play in big spots. But Minnesota’s cornerback corps has unfortunately lost it. Former All-Pro Xavier Rhodes looks like he’s toast, and Trae Waynes and Mike Hughes have been routinely burned as well. There’s so much talent in that secondary, but they’re struggling mightily.

Buffalo’s a relatively talented team with a strong defense, and quarterback Josh Allen has made plenty of progress during his sophomore season. But since Week 3, he’s completed just five deep passes that resulted in gains of 25-plus yards. Buffalo’s schedule has been comically easy, too. Can they keep defenses honest when that’s no longer the case?

Patrick Mahomes hasn’t been himself with a bad ankle, a bad knee and a target on his back this season, and it hasn’t helped that the Chiefs’ offensive line has been hammered by injuries. Throw in that new pass rusher Frank Clark has been hampered by a neck injury all year and Kansas City looks snake-bitten from a health standpoint.

It’s really that simple. They aren’t the same on that side of the ball without Clowney and the injured J.J. Watt, and they’re really struggling on third down and in the red zone. They give up too many big plays as well, which could be real problematic in January. That’s if they make it that far.

Ditto for the Raiders, but more so because they’e prone to too many miscues on that side of the ball. The Oakland D has committed an NFL-high 46 penalties this season, and they’ve also struggled on third down and in the red zone. The pass rush is much improved, but it still lacks consistency.

Twenty-seven quarterbacks have attempted more deep passes than the disciplined yet conservative Jacoby Brissett, who has completed just two throws that have gained 25-plus yards since the end of September. The Colts are deep and well-balanced, but Brissett isn’t the type of quarterback who can carry a team on his back in a playoff game.

The Cowboys might be the NFL’s fourth-highest-scoring team, but they’re the 12th-lowest-scoring team in the first quarter. They’ve recovered from early deficits against bad teams like Detroit, Washington and the Giants (twice, in fact), but against good teams they couldn’t get out of early holes (Green Bay and Minnesota, for instance). They also dug too deep a hole in a shocking loss to the Jets. It’s a problem.

Now that he’s getting less support from a depleted offensive line, a declining running game and a watered-down defense, Goff has been exposed. He’s the NFL’s seventh-lowest-rated passer, he’s completed just 57 percent of his passes since the start of October, and he’s thrown as many interceptions as touchdown passes since Week 3.

It’s apparent interim starting quarterback Kyle Allen is also a problem for a free-falling Panthers team, but it’s even more concerning that Carolina has surrendered 4.9 yards per rush and 128.4 rushing yards per game while struggling deeply on third-and-short and in the red zone.

Does anybody really trust Ryan Tannehill? He hasn’t been bad, but he’s not good, and we have a huge sample from the Miami Dolphins to back that up. The Titans also take a ridiculous amount of penalties on offense, and Derrick Henry hasn’t been consistent in the backfield.

The whole thing is a mess. Non-stop turnovers, no running game, no consistency. They’re the worst offense in the league by a huge margin on third-and-short, which is a tremendous indictment on that entire unit.

Only Bears and Dolphins pass-catchers have dropped more passes than Philly’s group. Alshon Jeffery has disappointed while dealing with injury issues, Nelson Agholor has been arguably the worst receiver in the NFL, and with DeSean Jackson on injured reserve there’s really nobody else. Poor Carson Wentz.