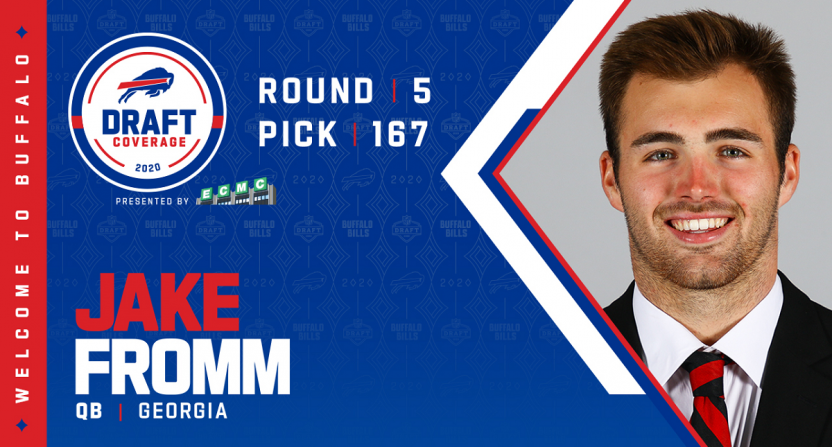 It feels like every NFL draft has a quarterback expected to go early who ends up sliding down the draft board. Sometimes (Lamar Jackson, Aaron Rodgers) that player makes everyone look foolish. Other times (Jimmy Clausen, Brady Quinn, DeShone Kizer…wait) the NFL ends up looking a lot smarter.

It’s a trope common enough to have been a pivotal plot point on Sports Night twenty years ago, and every spring someone ends up sitting on top of “Mel’s Best Available” list for hours while others at his position get taken. This year’s version was former Georgia quarterback Jake Fromm, who left for the NFL after his junior season. Before the year, Fromm was a projected first-round pick, but a season of relative struggle meant he entered the draft projected more in the second to third. And yet, after the first three rounds, Fromm remained on the board heading into the third day.

The 2020 draft process was clearly an unusual one; in a different year, Fromm would have had more of a chance to impress scouts and teams in person, especially since all teams had was a sub-par performance at the combine. Fromm continued to slide on Saturday, with the Colts (Washington’s Jacob Eason) and Jets (FIU’s James Morgan) both going in the fourth round. After sliding through most of the fifth, though, Fromm finally heard his name called.

Fromm ended up the eighth quarterback chosen, which was certainly a surprise. Will Fromm prove the doubters wrong? Maybe! His system was fairly conservative at Georgia, but when he was allowed to make plays he tended to make them, flashing a variety of throws that should translate well to the NFL.

ESPN’s post-pick analysis agreed, although considering how long Fromm spent in that #1 available slot, we already knew Mel Kiper Jr. felt he should have gone earlier.

At the very least, Fromm seems like a safe bet to stick around as a competent backup, and as Chase Daniel has shown, that’s a potentially lucrative career these days. And if that’s truly his floor, any ceiling remaining is a bonus for the Bills at this point in the draft.