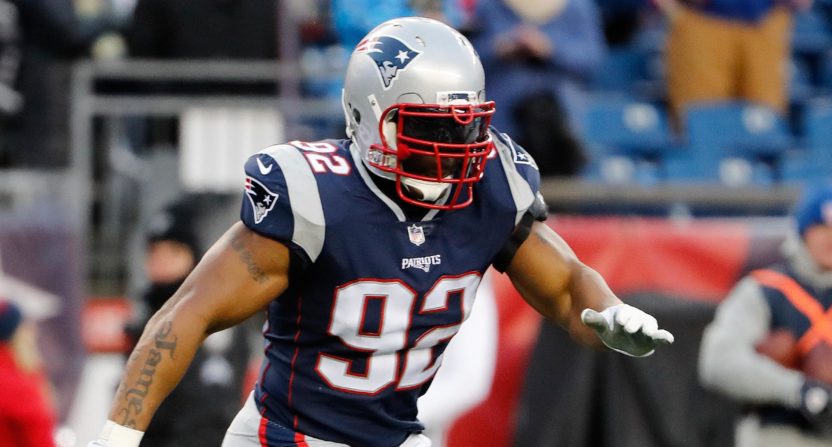 Now that longtime Pittsburgh Steelers and short-time Baltimore Ravens, Cincinnati Bengals and New England Patriots linebacker James Harrison has announced his retirement, one of the first questions regarding the 39-year-old’s kick-ass career is whether it was illustrious enough to earn a spot in the Pro Football Hall of Fame.

By the way, as the NFL Draft approaches, it’s worth pointing out that Harrison was not selected. He signed as an undrafted free agent with the Steelers in 2002. With that, let’s break down Harrison’s 15-year career.

Why he probably won’t get in

There seems to be a near-consensus online that Harrison didn’t do enough to make it to Canton.

Joe Starkey of the Pittsburgh Post-Gazette made a similar argument, noting that Harrison “was a good player for a long time, a great player for a short time and an all-time Steeler,” but that “his numbers aren’t good enough.”

“He had just three double digit-sack seasons,” added Starkey, “and let’s be honest: Unless you’re Jack Ham in every aspect of the game, sacks are going to be the primary measuring stick for an outside linebacker such as Harrison.”

“It doesn’t help his case that he spent his first several seasons as an afterthought, bouncing from team to team, and even continent to continent, before sticking as a special teamer in 2004,” wrote Matthew Marczi of Steelers Depot. “He had an excellent career, and one that it could be reasonably argued that is worthy of enshrinement. But that is not likely to be the end he will receive, even if I would like to be wrong.”

Why he should have a shot, eventually

But Harrison’s accomplishments are less statistical and more anecdotal. Here’s a nice summary from Ron Cook of the Pittsburgh Post-Gazette:

“There was the Christmas Eve game at Cleveland in 2005 when Harrison body-slammed a fan who came on the field. Happy holidays, pal!

“There was the home game against Baltimore in 2007 when Harrison had 3½ sacks, 9 tackles, 3 forced fumbles and an interception. No less than Jack Lambert sent a handwritten note of congratulations.

“There was the 2008 season when Harrison set a Steelers record with 16 sacks and led the NFL with seven forced fumbles. He was named the league’s defensive player of the year.

“There was Super Bowl XLIII against Arizona when Harrison returned a Kurt Warner interception 100 yards for a touchdown. It was the greatest play in Super Bowl history, all due respect to Eli Manning-to-David Tyree and Roethlisberger-to-Santonio Holmes. He easily could have been the game’s MVP instead of Holmes.”

The man was part of two Super Bowl teams, and the Steelers don’t win that second one without him. No chance. He made what might have been the greatest play in Super Bowl history. That was also the season he won defensive player of the year, an award that should automatically get you into the Hall of Fame conversation. Anyone who at any point was the best player in the game at his position has to be considered, especially if they’ve done as much beyond that as Harrison has.

We have to start thinking of potential Hall of Famers for the moments they gave us and the impact they made on NFL history. Dozens of Hall of Famers haven’t won offensive or defensive player of the year, 30 were never first-team All-Pros (Harrison was twice) and hundreds never made the kind of impact Harrison did in the Super Bowl.

I might be suffering from recency bias, but I don’t see how anyone could consider that and conclude that James Harrison doesn’t deserve to be strongly considered for Canton, even if not on the first ballot.