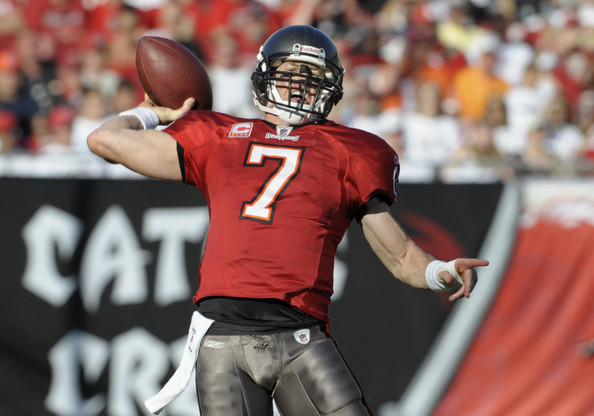 Over the past few years, the NFL has had many guests announce picks at the NFL Draft. From former players to children to animals, it’s now a part of the experience of the draft.

Thank you for the honor of representing @NFL @Buccaneers and announcing their 3rd Round pick at the 2018 #NFLDraft Tune into @FanComSports for behind the scenes pictures & video from the draft.

Anyway, when word came out that the Buccaneers traded their third-round pick, Garcia got a bit heated with Tampa Bay Times reporter Greg Auman.

Whatever the pick is, I’ll be announcing one. Don’t turn this into some clown show dude. I could care less about who they pick nor do I pay any attention as to what picks they have or don’t have. I have a life.

Garcia apologized on Twitter both to Auman directly and to the public in general and credited his response as a misunderstanding over what his exact role was on draft day since plans changed.

My bad Greg. Just caught me in a moment man. I wouldn’t say it was an honor if I didn’t care, I don’t know the logistics of how things go and figured if it wasn’t a 3rd, it would be another. Hope all is well man.

My bad @Buccaneers fans and @gregauman wasn’t trying to be a dick, I wouldn’t have said it was an honor if it wasn’t but I would have liked to have been informed that they didn’t have a 3rd before I tweeted it, just was a bit of embarrassment. Loved my time in Tampa & the fans.

Yes, the response was rather strong, but I have to say I might’ve acted the same if I was in Garcia’s shoes. I would’ve just done it privately. It’s a peek behind the curtain in terms of how the logistics of a moment like this works. When something is planned and set, then plans change, it can get frustrating. We just don’t see this publicly.

At the same time, one can be proud of going to Dallas to represent a team you used to play for and announce a pick, while at the same time not being obsessed with reading mock drafts and speculating what name he was announcing. In that instance, Garcia is probably too busy to be aware of the Bucs’ middle-round draft progress and whether it’s a third or in some other round, it didn’t much matter to Garcia as long as he got to announce a pick. It just came out sounding like Garcia didn’t care about what it was he was doing and was doing it because he had to.