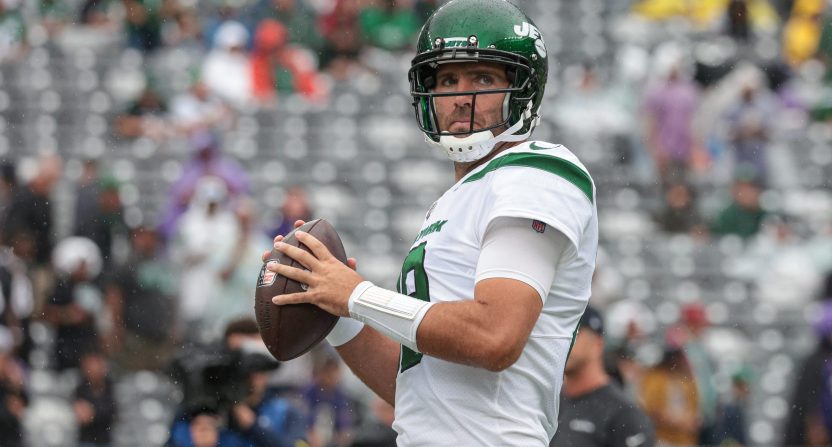 The New York Jets struggled mightily to produce much offense in their first game of the season last weekend, looking overmatched on that side of the ball in their 24-9 loss to the Baltimore Ravens.

Veteran quarterback Joe Flacco started in the absence of second-year quarterback Zach Wilson, which wasn’t exactly the most popular decision for many Jets fans.

In the middle of the third quarter of Sunday’s game, Jets fans broke out a “Mike White” chant, calling for the fan-favorite quarterback to get an opportunity over Flacco while Wilson is sidelined with his injury.

He did not enter the game, and it appears that he also will not get a chance in the Jets’ Week 2 matchup against the Cleveland Browns.

ESPN’s Rich Cimini reported on Wednesday that Jets head coach Robert Saleh has decided that Flacco will start again against Cleveland, which isn’t exactly surprising considering his previous comments on their quarterback situation on Monday.

Joe Flacco will remain the Jets’ starting QB this week, per source. Not a surprise. On Monday, Robert Saleh indicated Flacco would “likely” start, although he did open the door a crack. Don’t get the impression that benching Flacco for Mike White was strongly considered. #Jets

As expected, most Jets fans aren’t exactly thrilled at this decision to roll with Flacco this weekend.

The #nyjets rolling with Joe Flacco in week two is absolutely insane. You have two guys who you could absolutely win with behind him. But I guess the idea is if we lose with a vet as the QB it’s somehow less embarrassing than taking a big swing with an unproven talent? Idk.

Sad that I’ve been reading articles and tweets like this from you for nearly 30 years. This franchise will never, ever, ever figure out its QB situation. Or so it seems.

This is a mistake. There's literally nothing to lose playing White. Playing Statue Flacco with Miles Garrett rushing us a terrifying thought

The issue that many Jets fans seem to have is that playing Flacco at quarterback doesn’t seem to have all that much upside.

At this point in his career, Flacco is an extremely stationary quarterback with some very real flaws in the modern game of football where mobile quarterbacks are becoming more and more valuable.

While Flacco wasn’t horrible for the Jets in Week 1, he also didn’t show much to inspire much belief in a better performance in their matchup against a talented Browns defense led by top pass rusher Myles Garrett.

Considering Flacco was sacked three times by the Ravens in their first matchup, it seems very likely that Garrett could give the Jets offense some huge problems this weekend.