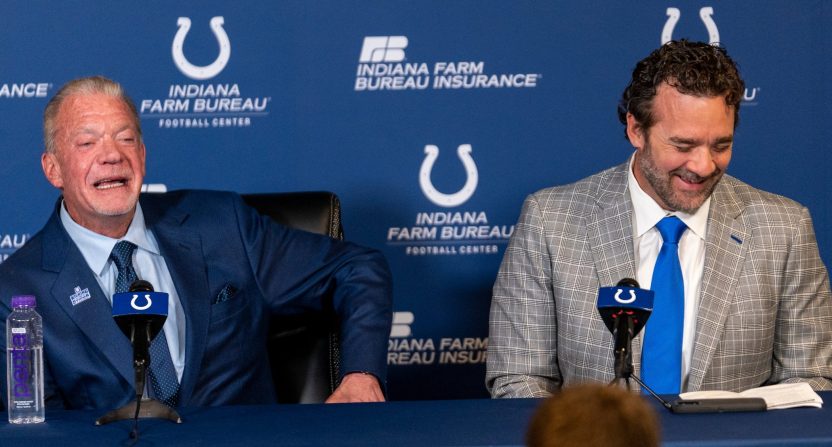 After the Indianapolis Colts announced that they were installing ESPN’s Jeff Saturday as their interim coach for the rest of the season, NFL Network’s Kyle Brandt wondered if ESPN talent would be able to criticize the decision. They’ve certainly proven that they can, but another NFL Network on-air personality also proved he has no problem going all-in on team owner Jim Irsay and the decision.

Irsay has caught a lot of flak for hiring Saturday, who has no NFL coaching experience, instead of elevating a Black assistant coach. The relationship between Irsay and Saturday has also been called into question by many.

Friday, NFL Network analyst Joe Thomas said he found the hire to be “disrespectful” and “egregious,” accusing Irsay of hiring one of his drinking buddies to run an NFL team.

“When you hire your drinking buddy to be the head coach of an NFL football team, it is one of the most disrespectful things I’ve ever seen in my entire life — to the commitment, the lifestyle, and the experience that it takes to be an NFL coach, or any coach, much less the head coach of the Indianapolis Colts,” Thomas said on Friday’s episode of “Good Morning Football.”

“You have got to be kidding me that this is something that Jim Irsay — and Jeff Saturday, who is not blameless for accepting the job — could have talked and decided that this was the best thing for the Indianapolis Colts at this juncture of the season.”

Thomas also took offense at the way Irsay defended the hire, saying that he was glad Saturday didn’t have relevant coaching experience because that might make him “afraid.”

“The disrespect that NFL coaches have to feel when they saw that this hire was made was higher than almost anything I can remember in the NFL.,” said Thomas. “And then to defend the decision by saying ‘I’m happy that he doesn’t have any experience because he’s not scared,’ like if you didn’t already insult every person that’s ever worked their entire life to be a head coach in the NFL.

“When I saw this, I thought it was a joke. … It was the most egregious thing I can ever remember happening in the NFL, and I went 1-31 my last two years in the NFL.”