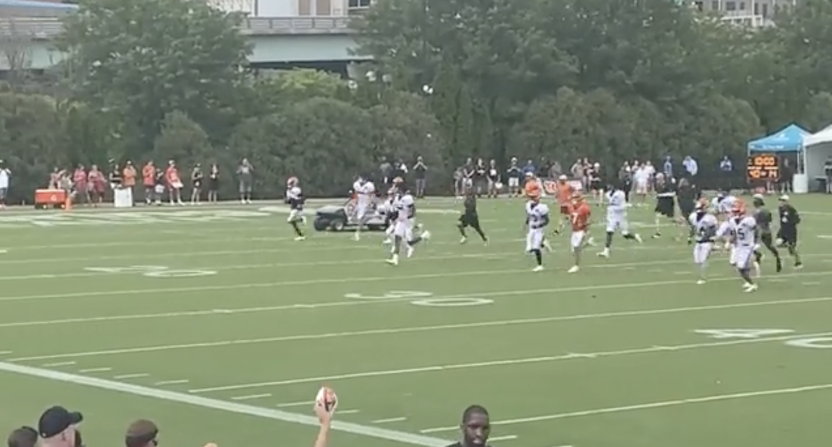 Even though he’s only been in the NFL for two seasons, quarterback Joe Burrow is the unquestioned leader of the Cincinnati Bengals, and he proved that once again this week, leading his team through a drill in an absolutely hilarious way.

Burrow is currently unable to practice with the team after undergoing an appendectomy last month, but that hasn’t stopped him from attending preseason camp with his teammates and even sometimes participating the best he can, as he did on Thursday.

Following Thursday’s practice, the Cincinnati offense stayed on the field to run wind sprints. Burrow, still mostly immobilized after the procedure, was physically unable to run with the team. But he still found a way to participate in another way, hilariously driving the cart across the field alongside his team.

While the video is comical, it’s also a great show of leadership from the young quarterback. He could be checked out and inactive in the team’s preparation as he heals from his injury, but instead, he clearly wants to stay involved and help lead however he can.

There’s still no timeframe for Burrow’s return to the field, with Bengals coach Zac Taylor saying last week that the team was “just trying to give him some privacy.” But based on how eager the third-year quarterback is to even do a small drill with his team from the cart, it’s probably safe to say he’ll be back on the field as soon as physically possible.