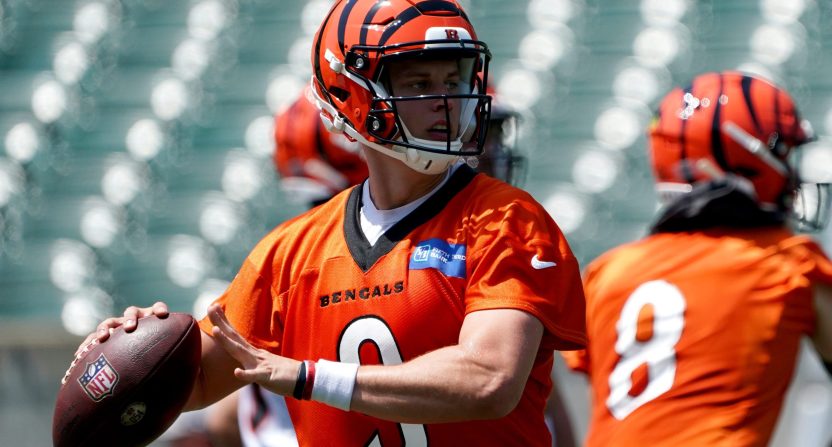 Football fans around the world are rejoicing on Sunday for the debut of NFL action on Sundays for the 2022-23 season, and Cincinnati Bengals star quarterback Joe Burrow had a start to the NFL season that he would love to take back.

The Bengals are taking on the Pittsburgh Steelers in their first game of the season, and Burrow got his season off on the wrong foot, starting his opening drive by getting sacked by Steelers star defensive lineman Cameron Heyward.

Things went from bad to worse for Burrow and the Bengals on their opening drive, as Burrow went on to throw an interception that was taken back for a touchdown by star safety Minkah Fitzpatrick on his first pass attempt of the season.

To make matters worse, Burrow fumbled later in the second half, leading to a Steelers’ field goal. He then threw another interception to Steelers’ star T.J. Watt in the second quarter and then yet another to Cameron Sutton.

In total, Burrow had four first-half turnovers just by himself – three interceptions and a fumble.

Considering Burrow is coming off an excellent season last year that helped lead the Bengals to a Super Bowl appearance, many are shocked that he has had such a terrible start to the game against the Steelers.

Watching this on loop pic.twitter.com/vPgIoLPGp4

Hmm. Most accurate QB in the league throws the NFL's first pick-six of the year.

Minkah Fitzpatrick: just who we all suspected to score the year’s first Sunday TD!

What a start for the D #HEREWEGO pic.twitter.com/YFJVvyp2c1

The “Super Bowl hangover” is something that many teams face after appearing in the Super Bowl in their prior season, and it appears that may be affecting Burrow to begin the year.

Burrow and the Bengals will need to get it together in this game if they want to beat the always well-coached Steelers team led by longtime Pittsburgh coach Mike Tomlin.