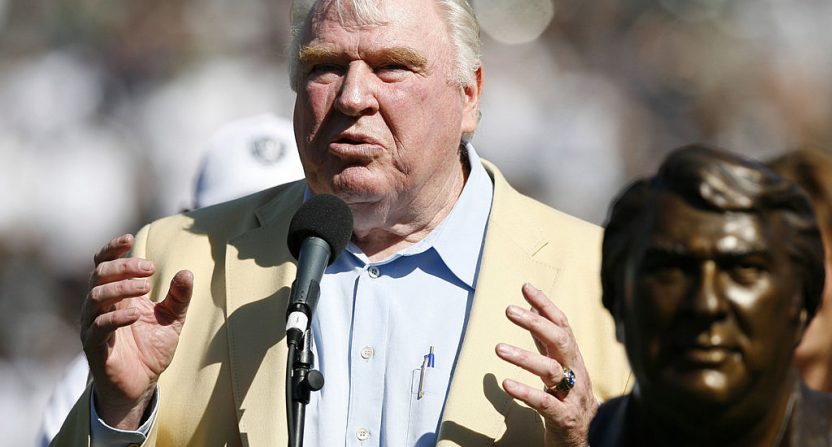 John Madden, a football legend not just for his popular video game franchise but also for his time as an innovative head coach and color commentator on TV, is not happy about seeing the Oakland Raiders receive approval to move to Las Vegas. Madden, who won a Super Bowl with the Oakland Raiders, voiced his displeasure over the lopsided vote among NFL owners in favor of allowing the Raiders to relocate to Oakland as soon as a football stadium is ready.

“Maybe this is just me being oversensitive, but doggone it, if you’re going to go, that’s really tough, but leave us something,” Madden said in an interview airing on SiriusXM NFL Radio “Leave us something here in Oakland. Please.”

Madden was stunned to see just how swiftly the league moved in favor of sending a team to Las Vegas, especially considering the league’s stance against sports gambling over the years. Also, the fact the Raiders do not have a stadium ready to move into for at least another couple of years seemed to puzzle the icon a bit more.

“I’m not sure they have that whole deal together yet,” Madden said. “I’m not sure that they even know exactly what the stadium is, how many, where it’s going to be and all those things. For some reason, they jumped into that thing quickly.”

To clarify Madden’s comments just a bit, the Raiders do have a good sense of what the plan is for the new stadium in Las Vegas. It’s not quite like the Raiders made the decision to move and they’ll scramble to put together all of the plans on the fly. But not having everything completely lined up and written in stone is just a mild concern for the league, as evidenced by a 31-1 vote in favor of a move to Las Vegas.

As for why the Raiders are moving? It all comes back to money. Las Vegas was willing to pony up the money needed for a new, state-of-the-art facility while the Raiders have been scraping by in the aging and decrepit Oakland Coliseum. After years of bickering about a future stadium, enough had become enough for the Raiders, and Las Vegas was there to welcome a franchise with open arms.

But Madden is also worried about the legacy of the Raiders in Oakland and the history that could easily vanish from the city – a history he played a big role in building. And he expressed his concern in typical Madden fashion, with a “Boom!”

I guess we’ll always have the Madden NFL franchise to give us a chance to replay historic moments in Oakland Raiders history, at the very least.